Roscoe is a hamlet (and census-designated place) in Sullivan County, New York, United States. The population was 541 at the 2010 census.

Roscoe is in the southwest part of the Town of Rockland, adjacent to New York State Route 17.

It is named for New York Senator Roscoe Conkling.

Roscoe calls itself "Trout Town, USA." The town is a destination for fly-fishing enthusiasts because of its location at the intersection of two rivers popular for trout fishing (the Beaver Kill and the Willowemoc Creek).

The community is a popular stopping point for people traveling along Route 17 (between New York City and Binghamton, New York) because the facilities are right by the access road to the highway. These include gas stations and convenience stores.

In 1789 Roscoe was called Westfield Flats. It was the home of the Delaware Indians, where wolves roamed freely.

Roscoe, like most of the Catskills, was part of the Hardenbergh Patent in the early 18th century which in turn was purchased by the last Lord of the Manor of Livingston Manor, Robert Livingston. The first settlers were brothers who bought the area around Roscoe from Livingston's son Jonathan Livingston. Stewart Street is one of the community's main streets.

During the construction of New York State Route 17 (Southern Tier Expressway), the section near Roscoe was one of the last to be completed, requiring travelers to exit onto the local truck roads for several miles.

The Dundas Castle and Roscoe Presbyterian Church and Westfield Flats Cemetery are listed on the National Register of Historic Places.

According to the United States Census Bureau, the CDP has a total area of 0.7 square miles (1.8 km2), all land.

Roscoe is just inside the boundary of the Catskill Park and is at the junction of Beaver Kill and Willowemoc Creek. 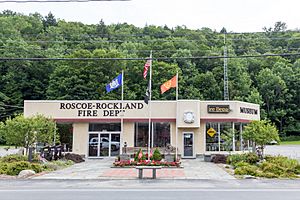 There were 261 households, out of which 28.0% had children under the age of 18 living with them, 46.4% were married couples living together, 10.7% had a female householder with no husband present, and 39.8% were non-families. 35.2% of all households were made up of individuals, and 19.5% had someone living alone who was 65 years of age or older. The average household size was 2.29 and the average family size was 2.96.

All content from Kiddle encyclopedia articles (including the article images and facts) can be freely used under Attribution-ShareAlike license, unless stated otherwise. Cite this article:
Roscoe, New York Facts for Kids. Kiddle Encyclopedia.