Declaration of Arbroath facts for kids 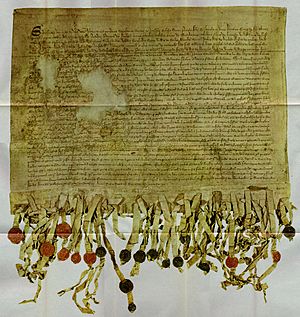 The 'Tyninghame' copy of the Declaration of Arbroath dated 1320 AD

The Declaration of Arbroath is a declaration of Scottish independence, made in 1320. It was a letter sent to Pope John XXII, dated 6 April 1320. The declaration confirmed Scotland's status as a independent, sovereign state and defended Scotland's right to use military action when unjustly attacked. The letter was signed at Arbroath by eight earls and thirty-one barons.

When King Alexander III of Scotland died in 1086, his heir was his granddaughter Margaret, Maid of Norway. King Edward I of England negotiated to have his son, Edward II of England become her husband and share the crown of Scotland in 1289. But Margaret died on her way from Norway to Scotland in 1290. This began a period in Scotland called the First Interregnum (1290–1292). Scotland was without a monarch. Edward I stepped in to choose who would be king from among the candidates who had any claim to be king. He chose John of Scotland. But Edward treated the Scottish king badly. When King John tried to break free, Edward put him in prison, then allowed him to live in France. In 1296 Edward invaded Scotland with his army to take everything for himself. Scotland remained without a king until 1306 when Robert the Bruce declared himself king of Scotland defying Edward I. Just before doing this Robert the Bruce had been involved in a dispute with John Comyn. The two met before the altar in Greyfriars Church in Dumfries in 1306 and a fight broke out. John Comyn was killed and Robert the Bruce was crowned king three weeks later at Scone. Accused of murdering Comyn Bruce was excommunicated by the Pope. During the wars that followed the Scots won a major battle at the Battle of Bannockburn in 1314. In 1317 the pope called for a two year truce which Scotland ignored. For failing to listen to him he excommunicated all of Scotland.

The Declaration was part of a larger plan to show the Pope and others that Scotland was an independent kingdom and had a right to rule itself. The English king Edward I had written to the pope before confirming his right to rule Scotland. For his part the pope refused to accept Robert the Bruce as the king of Scotland.

Dated April 1320 the Declaration of Arbroath was a letter to Pope John XXII at Avignon from fifty leading men of Scotland. There were 39 names, (eight Scottish earls and thirty one barons), who signed the document with their seals. On strips on the bottom of the letter are seals and names of eleven more who signed. Bernard Linton, Chancellor of Scotland and Abbot of Arbroath is believed to be the author. It was written at the monastery of Arbroath in Scotland.

The most-cited passage of the Declaration, translated from the Latin original...

The letter began by reminding the pope of Scotland's conversion to Christianity by Saint Andrew. That under the protection of the church Scotland had lived in peace until King Edward I of England pretended to be their friend. He then invaded their country while it was without a king. The letter then told of the hardships they faced under English rule. Showing their resolution the letter stated:

...for so long as there shall be but one hundred of us remain alive we will never give consent to subject ourselves to the domination of the English. For it is not glory, it is not riches, neither is it honour, but it is freedom alone that we fight and contend for, which no honest man will lose but with his life.

The pope was impressed by the declaration and with the promise by the Scottish barons to support the pope's crusade. He encouraged Edward II to make peace with the Scots. The pope sent two delegates. The French king also wanted to see peace between England and Scotland and he sent two delegates. Peace talks went on until 1321 without the English recognizing Scottish independence.

...as displayed on the walls of the National Museum of Scotland

The English convinced the pope it was the fault of the Scottish that there was no progress. The pope issued six rulings against the Scots stating all invaders of England would be excommunicated and re-issued the excommunication against Robert the Bruce.

Finally in October 1328 a peace treaty was agreed to between Scotland and England. Edward III gave up all claims on Scotland. The interdict on Scotland and the excommunication of its king were finally removed. The second part of the treaty agreed that the son of Robert the Bruce, David II of Scotland and the sister of Edward III of England would marry. The wedding took place on 12 July of 1338 when David II, then four years old married Joan of the Tower, aged six, at the church at Berwick, Scotland.

All content from Kiddle encyclopedia articles (including the article images and facts) can be freely used under Attribution-ShareAlike license, unless stated otherwise. Cite this article:
Declaration of Arbroath Facts for Kids. Kiddle Encyclopedia.