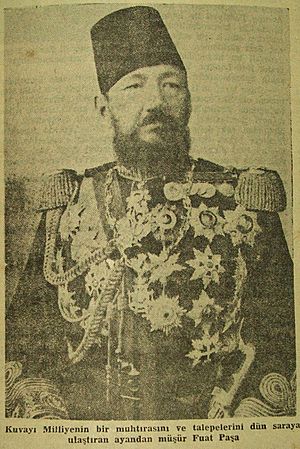 Fuad Pasha was born in 1835 in Egypt. He was the son of Müsür Hasan Pasha. He ascended to colonel rank in Egyptian army. He came Istanbul in 1869. He won Liva rank in Ottoman Army in 1872. He took office 1877–1877 in Tuna frontline Ottoman-Russsian War. He was commander in Elena Conflict in side of Ottoman troops and gained "Elena Hero" title for his achievements. Also gained "Deli" title which means exactly "Crazy" because of his courage. But in 1902 he sent into exile by Abdulhamid II to Damascus. He returned Istanbul in 1908 when The Second Constitutional Era announcement.

He was 96 years old when he died in Istanbul.

All content from Kiddle encyclopedia articles (including the article images and facts) can be freely used under Attribution-ShareAlike license, unless stated otherwise. Cite this article:
Deli Fuad Pasha Facts for Kids. Kiddle Encyclopedia.