Delos L. Filer was a northern Michigan nineteenth century businessman famous for developing Manistee County and the towns of Manistee, Filer City and Ludington in the state of Michigan. He was a lumber baron, real estate developer, and philanthropist.

Filer was born in Herkimer County in the state of New York on September 17, 1817. He is of Scottish ancestry.

Filer attended local public schools for his initial training. Because of his scholastic interests he soon became a teacher in the New York District School system.

Filer had a particular keen interest in the lumber industry and merchandising early in his adult life. He left New York in 1849 and moved to Racine, Wisconsin. There he became a traveling salesman selling cigars and tobacco. Filer did this occupation for four years. His territory was Wisconsin and Illinois.

Filer came to Manistee, Michigan, in the fall of 1853. He became bookkeeper for the accounting firm E. & J. Canfield. Filer had already had been previously employed with the Canfields in Racine. In Manistee he earned $400 per year, which was not enough to support his family. To supplement his income to have enough money for his wife and four children he used his knowledge of medicine to work part-time in the field as a physician. He worked throughout Manistee County and the surrounding counties. 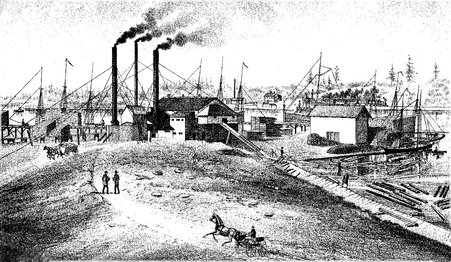 Filer saved up enough money by 1858 to buy property. First he bought some land containing timber and then a half-interest in the Batchelder mill property that included a sawmill. He was successful in operating his half of the sawmill business and eventually bought out the other half-interest. Success in operating the Batchelder mill he owned outright gave him the opportunity to buy additional surrounding land containing timber. Filer then bought the McVickar estate in 1862. At this point the land he owned was around two-thirds of the present day city of Manistee.

Filer established the firm D. L. Filer & Sons in 1866. His sons names were Delos W. Filer and E. Golden Filer. He sold his interest in the land encompassing the future Manistee area to the firm. The firm also bought 2,500 acres of land three miles from Manistee at the south end of Manistee Lake. It contained mostly timber. Here they built a double circular sawmill in 1867 under the name of the Filer lumber mill. It was located at the mouth of the Little Manistee River that flows into Manistee Lake. Part of the acreage was platted and became Filer City, a suburb of Manistee.

Filer was a founding father of the city of Manistee through the sawmill firm. He donated land and money for building public buildings and churches to help develop the town. The management of the sawmill firm was done mostly by Filer's sons. The sawmill was eventually updated to produce 100,000 feet of lumber, 250,000 shingles, and 50,000 lath daily. The Filer & Sons lumber mill at Filer City went out of business in 1914 after using up all their timber.

Filer moved to Ludington in 1868. He became one of the owners of Pere Marquette Lumber Company that officially organized in 1869. The other owners of the lumber company were Edward A. Foster and Luther H. Foster both of Ludington, John Mason Loomis of Chicago, and James Ludington of Milwaukee. The lumber company bought for $500,000 the property previously owned by James Ludington that encompassed the future town of Ludington. This included 25,000 acres of pine timber, Pere Marquette village platted lots, a large general store, and the local sawmills. Filer became the new lumber company's president.

Filer traveled extensively in the South and West late in his life due to failing health. He started to travel to California in the winter of 1878, but only got as far as Denver. There he became seriously ill and returned to Ludington. After a long illness he died on July 26, 1879. He is buried in Forest Home Cemetery in Milwaukee, Wisconsin.

All content from Kiddle encyclopedia articles (including the article images and facts) can be freely used under Attribution-ShareAlike license, unless stated otherwise. Cite this article:
Delos L. Filer Facts for Kids. Kiddle Encyclopedia.