Delta Charter Township, officially known as the Charter Township of Delta and commonly known as simply Delta Township, is a charter township of Eaton County in the U.S. state of Michigan. As of the 2010 census, it had a population of 32,408 making it the most populous municipality in Eaton County. The township operates its own fire department, but contracts with the Eaton County Sheriff Department for police protection. The township is a major community in metropolitan Lansing.

Since 2000, the township has entered into four 425 Agreements with the neighboring city of Lansing, which has resulted in the temporary transfer of 1.76 sq mi (4.6 km2) of land to Lansing. The agreements facilitated the construction of the Lansing Delta Township Assembly Plant as well as three auto suppliers.

There were 12,559 households out of which 28.4% had children under the age of 18 living with them, 52.1% were married couples living together, 9.4% had a female householder with no husband present, and 35.7% were non-families. 29.4% of all households were made up of individuals and 9.0% had someone living alone who was 65 years of age or older. The average household size was 2.33 and the average family size was 2.92. 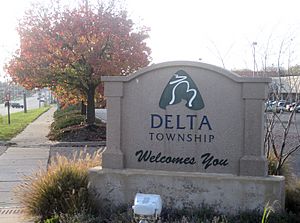 Three major Interstate Highways pass through Delta Charter Township and include Interstate 69 (I-69), I-96, and I-496. Saginaw Highway (M-43) is the major thoroughfare with many commercial businesses located along the road.

All content from Kiddle encyclopedia articles (including the article images and facts) can be freely used under Attribution-ShareAlike license, unless stated otherwise. Cite this article:
Delta Charter Township, Michigan Facts for Kids. Kiddle Encyclopedia.