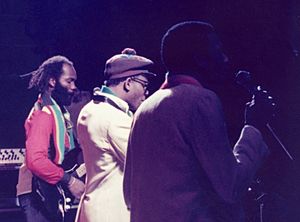 Dennis Bovell (born 22 May 1953) is a Barbados-born reggae guitarist, bass player and record producer. He is based in England. He was a member of the British reggae band Matumbi. He also released dub-reggae records under his own name as well as the pseudonym Blackbeard. He is most widely known for his decades-spanning collaborations with Linton Kwesi Johnson.

All content from Kiddle encyclopedia articles (including the article images and facts) can be freely used under Attribution-ShareAlike license, unless stated otherwise. Cite this article:
Dennis Bovell Facts for Kids. Kiddle Encyclopedia.