Kids Encyclopedia Facts
This page is about the 1986 American animated series. For the 1959 live action series, see Dennis the Menace (1959 TV series).

Dennis the Menace is a 1986-1988 American animated series produced by DIC Animation City (with season 2 co-produced by Crawleys Animation), based on the comic strip by Hank Ketcham.

The series was originally aired in syndication in the United States, distributed by The Program Exchange. The second season aired on Saturday mornings on CBS. Each half-hour series consists of three six- or seven-minute episodes. The show was sponsored by General Mills, who are also credited as the show's copyright owner. 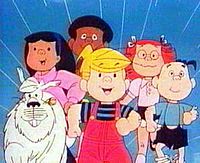 Dennis' Great Adventure – contains the episodes All the President's Menace, The Abominable Snow Menace, Dennis in Venice and The Big Candied Apple.

Boys Will Be Boys – contains the episodes Disaster on the Green, Baseball's Best Ballplayer, Soccer it to Me, Dennis and Racetrack Menace.

Movie Exclusive - The Mitchell's Move (1987) - Dennis' father Henry gets promoted to a new job in his business, only his job is in Alaska, and Dennis and his family have to move in one week. Features the episodes The Boss Gets Scalped, The Big Candied Apple, Going to the Dogs, Vampire Scare, A Royal Pain, Trembly Assembly, and Shock Therapy.

In the UK the third series (1993) was released on a number of DVDs, each containing two classic episodes. These DVDs were also released in a box set and later re-released along with the 2002 special.

On September 6, 2016, Mill Creek released Dennis the Menace- The Complete Series 1&2 on DVD in Region 1 for the very first time. The 9-disc set contains all 78 episodes of the 1986-1988 series, including the final 13 episodes which were previously unreleased.

All content from Kiddle encyclopedia articles (including the article images and facts) can be freely used under Attribution-ShareAlike license, unless stated otherwise. Cite this article:
Dennis the Menace (1986 TV series) Facts for Kids. Kiddle Encyclopedia.