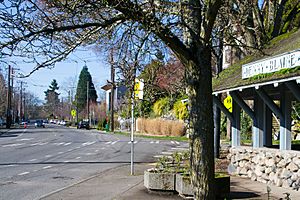 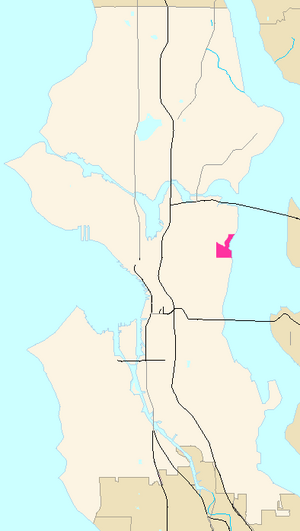 The neighborhood is named after its developers, Elbert F. Blaine and Charles L. Denny, who began subdividing the area in 1910. Denny was the son of Seattle pioneer Arthur Denny.

It was in his greenhouse at 171 Lake Washington Blvd. E. where Kurt Cobain was found dead in 1994. The greenhouse was razed by his wife, Courtney Love, shortly thereafter and the house and property were subsequently sold to a private party. A poignant memorial to the influential and troubled rocker can be found next door in Viretta Park, where messages and dedications have been carved into wooden benches.

All content from Kiddle encyclopedia articles (including the article images and facts) can be freely used under Attribution-ShareAlike license, unless stated otherwise. Cite this article:
Denny-Blaine, Seattle Facts for Kids. Kiddle Encyclopedia.