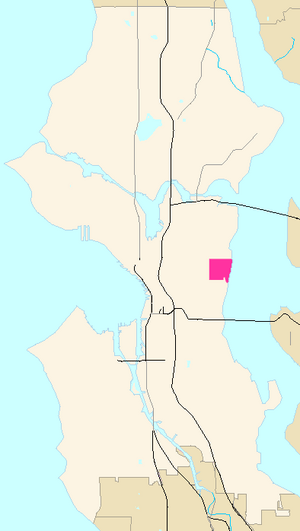 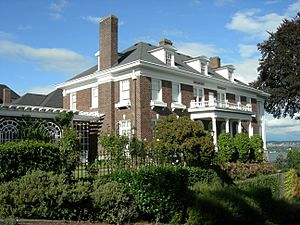 The Raymond-Ogden Mansion in Madrona (built 1913) is listed on the National Register of Historic Places.

The neighborhood's main thoroughfares are E. Union and E. Cherry Streets (east- and westbound), Madrona Drive (northwest- and southeast-bound), and 34th Avenue and Lake Washington Boulevard (north- and southbound). It is home to Madrona Park and the 34th Avenue and E. Union commercial area.

The neighborhood was named by John Ayer, who contributed the land for Madrona Park, after a species of tree (Arbutus) common to the area.

Madrona's motto, "The Peaceable Kingdom," reflects its racially mixed heritage. In the early 20th century, the coal mining industry brought Chinese immigrants to Madrona. Later, the shipbuilding boom brought an influx of African Americans. For most of the second half of the 20th Century, 34th Avenue divided the neighborhood between mostly middle-class African American (to the west) and upper-class Caucasian (to the east). The Black Panthers used the Madrona Playfield on Spring Street and 34th Avenue as its marching drill location in Seattle [1].

In more recent years, as the neighborhood has gentrified, Madrona has been steadily returning to a more Caucasian demographic. The 2000 Census notes that, of the 5,097 residents in King County Census Tract 78 (covering Madrona east of 31st Avenue), 72% are Caucasian (up from 65% in 1990), 20% are African American (down from 29% in 1990), and 4% are Asian (roughly unchanged from 1990). Census Tract 77, two-thirds of which is in the Central District, has a significantly higher percentage of African American residents.

All content from Kiddle encyclopedia articles (including the article images and facts) can be freely used under Attribution-ShareAlike license, unless stated otherwise. Cite this article:
Madrona, Seattle Facts for Kids. Kiddle Encyclopedia.