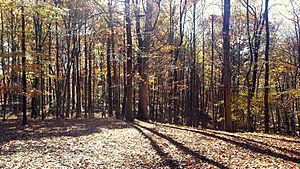 Derwood is an unincorporated area and census-designated place in east-central Montgomery County, Maryland, United States. It lies just north of Rockville, southeast of Gaithersburg, southwest of Olney, and northwest of the greater Silver Spring area. Derwood was originally "Deer Park" and was then "Deer Wood" before getting its current name.

Between 2009 and 2011, Maryland Route 200 (also known as the Intercounty Connector or ICC) was constructed directly through central Derwood, affecting Cashell Estates and areas near Shady Grove Road.

Derwood was first recognized in the 1880s as a train stop on the B&O Railroad, which is now the intersection of Indianola Drive and Maryland Route 355 in Derwood Station. A second, larger railroad station was built in Derwood from 1886-1889. In the early 1900s, a small community grew up around the station.

On January 7, 1954, Schwartz Mill caught fire and both it and the Derwood railroad station were destroyed. Derwood station was never rebuilt, since there were not enough passengers traveling through the area.

In 1965, the man-made Lake Needwood was created by impounding Rock Creek.

In 1974, the Derwood post office relocated to Redland Shopping Center. It kept the name "Derwood Branch," and designated the entire 20855 zip code area as Derwood, greatly increasing its size. The community's population expanded with the establishment of Shady Grove Metro station in 1984.

Derwood is located in the north central part of Montgomery county, in the Atlantic coastal plain. The community is near the start of the Appalachian highlands. Derwood has a humid subtropical climate similar climate to nearby Washington D.C. It lies in hardiness zone 7a, with chilly winters, where the daily maximum is mostly above freezing, and the minimum is generally below freezing.

Goodwill Industries is based in Derwood.

The Derwood Dusters football team of the DTFL plays their home games in Derwood.

All content from Kiddle encyclopedia articles (including the article images and facts) can be freely used under Attribution-ShareAlike license, unless stated otherwise. Cite this article:
Derwood, Maryland Facts for Kids. Kiddle Encyclopedia.