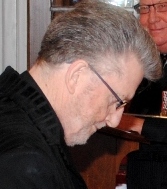 Sir Desmond John Britten KNZM (1939 – 13 February 2020) was a New Zealand restaurateur, radio broadcaster, television chef, cookbook writer and Anglican priest. He was Wellington City Missioner for 17 years, and was knighted in 2012. He was born Otane in Hawke's Bay.

Britten was ordained an Anglican priest in 1983 and became the vicar of St Barnabas Roseneath, in Wellington.

He presented two cooking shows on New Zealand television in the 1970s — Thyme for Cookery and Bon Appetit — and ran "The Coachman"' restaurant in Wellington for 28 years.

All content from Kiddle encyclopedia articles (including the article images and facts) can be freely used under Attribution-ShareAlike license, unless stated otherwise. Cite this article:
Des Britten Facts for Kids. Kiddle Encyclopedia.