Sphaeralcea ambigua, commonly known as desert globemallow or apricot mallow, is a member of the genus Sphaeralcea in the mallow family (Malvaceae).

It is a perennial shrub native to parts of California, Nevada, Utah, Arizona, and New Mexico in the United States and Sonora and Baja California in northwest Mexico. It grows well in alkaline soil, both sandy or clay, usually in the company of creosote bush scrub and desert chaparral habitats, at 150–2,500 metres (490–8,200 ft) in elevation. It is found in the Mojave Desert, Great Basin desert, and Sonoran Desert ecoregions. It is a larval host to the common checkered skipper, northern white skipper, painted lady, small checkered skipper, and West Coast lady.

The Sphaeralcea ambigua plant grows to 3 feet (0.91 m) in height and spreads to 2–3 feet (0.61–0.91 m) in width. The leaves (see image) are fuzzy with white hairs on both sides, lobed, palmately veined, and on long stems, the number of which increase with age. The fruit is a brown capsule containing numerous seeds, first quite spherical as implied by the genus name, later flattening to a disk. The flowers are bowl-shaped, five-petaled, apricot to orange in color, and blooming in the spring.

Sphaeralcea ambigua has eight or nine named varieties. They include: 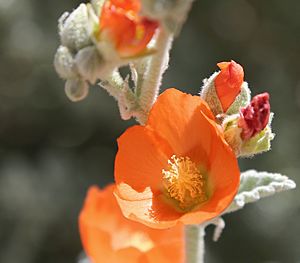 The plant was used by members of the Shoshoni tribe of Native Americans as a food source and medicinal plant.

Sphaeralcea ambigua is cultivated as an ornamental plant by specialty plant nurseries for use in desert and drought tolerant gardens, and a native plant its desert region's natural landscaping and habitat restoration projects. It requires the following conditions:

All content from Kiddle encyclopedia articles (including the article images and facts) can be freely used under Attribution-ShareAlike license, unless stated otherwise. Cite this article:
Desert globemallow Facts for Kids. Kiddle Encyclopedia.