Detroit Island is a mostly privately owned island in Lake Michigan in the southern part of the town of Washington in Door County, Wisconsin, United States. The island has a land area of 2.578 km² (0.9955 sq mi, or 637.12 acres). The northern end of the island borders the waters of Detroit Harbor.

Grand Traverse Island State Park was founded in 1970 and protects sightly more than 5 acres (2.0 ha) of land on Detroit Island. It consists of five discontiguous parcels and there is no ferry access. 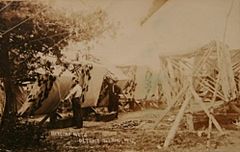 Fishermen working with nets on Detroit Island; from a postcard postmarked in 1909

The border between Wisconsin and Michigan was originally defined as "the most usual ship channel" into Green Bay from Lake Michigan but commercial routes existed both to the north and south of the island which lead to a border dispute. In 1936, the U.S. Supreme Court decision Wisconsin v. Michigan found that Detroit and three other islands were part of Wisconsin. 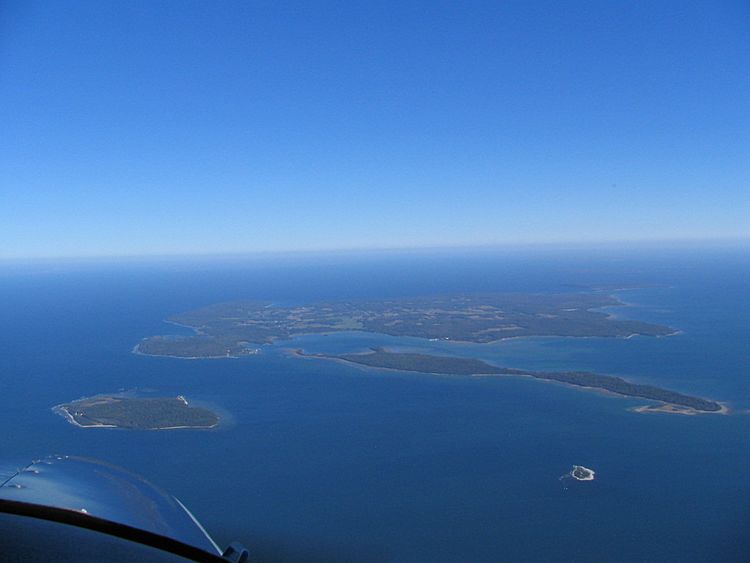 Detroit Island is the long and narrow island at center-right. Beneath Detroit Island on the right is the much smaller Pilot Island, with Plum Island is at the lower left. Washington Island is in the distance.

All content from Kiddle encyclopedia articles (including the article images and facts) can be freely used under Attribution-ShareAlike license, unless stated otherwise. Cite this article:
Detroit Island Facts for Kids. Kiddle Encyclopedia.