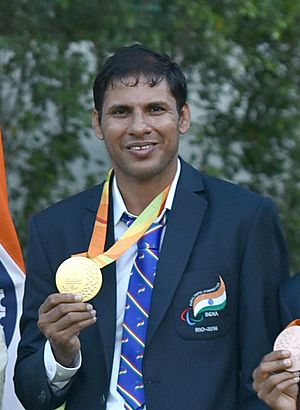 Devendra Jhajharia with a gold medal.

Devendra Jhajharia (born 10 June 1981) is an Indian Paralympic javelin thrower competing in F46 events. The first Indian Paralympian to win two gold medals at the Paralympics, he won his first gold in the javelin throw at the 2004 Summer Paralympics in Athens, becoming only the second gold medalist at the Paralympics for his country.[1] At the 2016 Summer Paralympics in Rio de Janeiro, he won a second gold medal in the same event, bettering his previous record.[2] Devendra is currently being supported by the GoSports Foundation[3] through the Para Champions Programme.

All content from Kiddle encyclopedia articles (including the article images and facts) can be freely used under Attribution-ShareAlike license, unless stated otherwise. Cite this article:
Devendra Jhajharia Facts for Kids. Kiddle Encyclopedia.