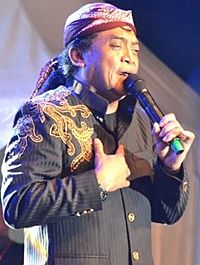 Didik Prasetyo, known as Didi Kempot (31 December 1966 – 5 May 2020) was an Indonesian singer-songwriter and philanthropist. He was born in Surakarta, Central Java.

In 1989 he released his debut album. A few years later he had his breakthrough with the singles "Stasiun Balapan" and "Sewu Kutho". He was known as "The Godfather of the Broken-Hearted". In 2020, he wrote the song "Ojo Mudik" and gave a concert livestreame from his house. It raised $500,000 for the fight against coronavirus disease 2019.

All content from Kiddle encyclopedia articles (including the article images and facts) can be freely used under Attribution-ShareAlike license, unless stated otherwise. Cite this article:
Didi Kempot Facts for Kids. Kiddle Encyclopedia.