Differences between butterflies and moths facts for kids 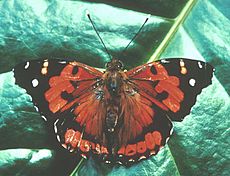 A Kamehameha butterfly with the clubbed antennae and slender body 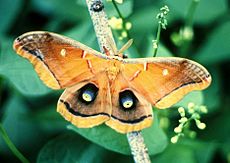 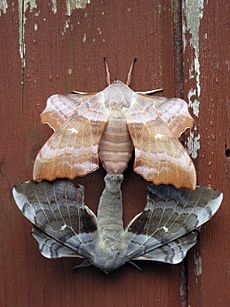 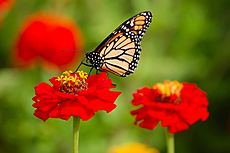 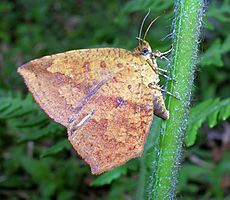 Tetragonus sp., a day-flying Callidulid moth holds its wings like a butterfly but lacks the knobbed antennae

In Linnaean taxonomy, moths are usually put in the suborder Heterocera. This tends to cover up the fact that they are not a true natural monophyletic group. However, moths do look and behave rather different from butterflies, which explains why people came to call them by a different name.

Other taxonomic schemes have been proposed, but none of them is perfect. Both taxonomists and amateurs make use of the obvious differences between butterflies and moths.

Shape and structure of antennae

The most obvious difference is in the feelers, or antennae. Most butterflies have thin slender filamentous antennae which are club shaped at the end. Moths, on the other hand, often have comb-like or feathery antennae, or filamentous and unclubbed. This distinction is the basis for the earliest taxonomic divisions in the Lepidoptera – the Rhopalocera ("clubbed horn", the butterflies) and the Heterocera ("varied horn", the moths).

There are, however, exceptions to this rule and a few moths (the family Castniidae) have clubbed antennae. Some butterflies, like Pseudopontia paradoxa from the forests of central Africa, lack the clubbed ends. The Hesperiids often have an angle to the tip of the antenna.

Many moths have a frenulum or wing coupling physically attaching upper and lower parts of their wings together. The frenulum can be seen only when a specimen is in hand. There are various types. It may be a filament from the hindwing coupling with barbs on the forewing. Butterflies usually lack these structures. Their wing coupling is usually done by simple overlap of wing edges.

Most moth caterpillars spin a cocoon made of silk when they go into the pupal stage. Most butterflies on the other hand form an exposed pupa called a chrysalis.

There are many exceptions to this rule. Hawk moths form an exposed chrysalis which is underground. Gypsy moths sometimes form butterfly-style pupae, hanging on twigs or tree bark, although usually they create flimsy cocoons out of silk strands and a few leaves, partially exposing the chrysalis. A few Skipper butterfly larvae also make crude cocoons in which they pupate, exposing the pupa a bit. The Parnassius butterfly larvae make a flimsy cocoon for pupation and they pupate near the ground surface between debris.

Colour of the wings

Most butterflies have bright colours on their wings. Nocturnal moths on the other hand are usually plain brown, grey, white or black and often with obscuring patterns of zigzags or swirls which help camouflage them as they rest during the day. However many day-flying moths are brightly coloured, particularly if they are toxic. A few butterflies are quite plain, like the cabbage white butterfly.

Structure of the body

Most moths are nocturnal or crepuscular (active at night) while most butterflies are diurnal (active at daytime). There are however exceptions, including the diurnal gypsy moth and the spectacular "Uraniidae" or Sunset moths.

Moths usually rest with their wings spread out to their sides. Butterflies frequently fold their wings above their backs when they are perched although they will occasionally "bask" with their wings spread for short periods. However some butterflies, like the skippers, may hold their wings either flat or folded or even in-between (the so-called "jet plane" position) when perched. Most moths also occasionally fold their wings above their backs when they are in a certain spot (like when there is no room to fully spread their wings). A sometimes confusing family can be the "Geometridae" (such as the winter moth) because the adults often rest with their wings folded vertically. These moths have thin bodies and large wings like many butterflies but may be distinguished easily by structural differences in their antennae (e.g. bipectinate).

All content from Kiddle encyclopedia articles (including the article images and facts) can be freely used under Attribution-ShareAlike license, unless stated otherwise. Cite this article:
Differences between butterflies and moths Facts for Kids. Kiddle Encyclopedia.