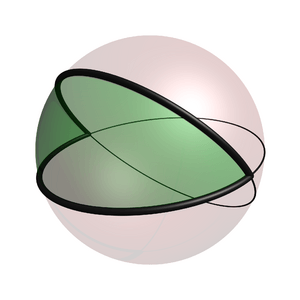 Regular digon on a sphere 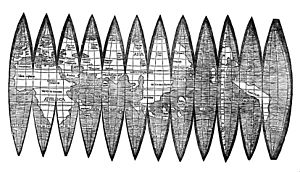 Digons can be used to make a globe. This one is a map by Martin Waldseemüller (15th century). This is the first map that shows the New World, and uses the name "Amerika" for it.

In geometry, a digon is a polygon with two sides (edges) and two vertices. Its construction is degenerate in a Euclidean plane because either the two sides would coincide or one or both would have to be curved; however, it can be easily visualised in elliptic space.

A regular digon has both angles equal and both sides equal and is represented by Schläfli symbol {2}. It may be constructed on a sphere as a pair of 180 degree arcs connecting antipodal points, when it forms a lune.

The digon is the simplest abstract polytope of rank 2.

All content from Kiddle encyclopedia articles (including the article images and facts) can be freely used under Attribution-ShareAlike license, unless stated otherwise. Cite this article:
Digon Facts for Kids. Kiddle Encyclopedia.