A diagram of the first four spatial dimensions. 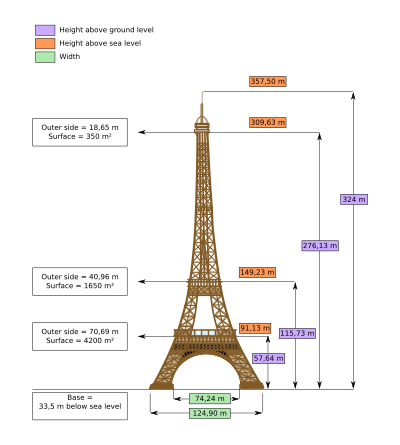 Dimensions of the Eiffel Tower

Dimensions are a concept from mathematics and physics.

There are different concepts where the term dimension is used and there are also different definitions. There is no definition that can satisfy all concepts.

Dimensions can be used to measure position too. The distance to a position from a starting place can be measured in the length, width and height directions. These distances are a measure of the position.

Sometimes a fourth (4D) dimension, time, is used to show the position of an event in time and space.

In modern science, people use other dimensions.

Dimensions like temperature and weight can be used to show the position of something in less simple spaces.

Vectors are used to show distances and directions. Vectors are often used in engineering, drawing and science, and sometimes in mathematics.

A vector is a list of numbers. There is one number for each dimension. There are arithmetic rules for vectors.

All content from Kiddle encyclopedia articles (including the article images and facts) can be freely used under Attribution-ShareAlike license, unless stated otherwise. Cite this article:
Dimension Facts for Kids. Kiddle Encyclopedia.