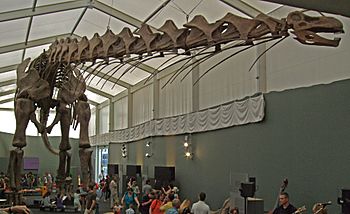 Dinosaur size has long been of interest to the scientific and the public. Dinosaurs show some of the most extreme variations in size of any land animal group, ranging from the tiny hummingbirds, which can weigh as little as three grams, to the extinct titanosaurs, which could weigh as much as 70 tonnes (69 long tons; 77 short tons).

We will never be certain of the largest and smallest dinosaurs to have existed. This is because only a tiny percentage of animals ever fossilize, and most of these remain buried in the earth. Few specimens recovered are complete skeletons, and impressions of skin and other soft tissues are rare. Rebuilding a complete skeleton by comparing the size and morphology of bones to those of similar, better-known species is an inexact art, and reconstructing the muscles and other organs of the living animal is, at best, a process of educated guesswork. Weight estimates for dinosaurs are much more variable than length estimates, because estimating length for extinct animals is much more easily done from a skeleton than estimating weight. Estimating weight is most easily done with the laser scan skeleton technique that puts a "virtual" skin over it, but even this is only an estimate.

Current evidence suggests that dinosaur average size varied through the Triassic, early Jurassic, late Jurassic and Cretaceous periods. Predatory theropod dinosaurs, which occupied most terrestrial carnivore niches during the Mesozoic, most often fall into the 100- to 1,000-kilogram (220 to 2,200 lb) category when sorted by estimated weight into categories based on order of magnitude. In comparison, recent predatory carnivore mammals peak in the 10- to 100-kilogram (22 to 220 lb) category. The mode of Mesozoic dinosaur body masses is between one and ten metric tonnes. This contrasts sharply with the size of Cenozoic mammals, estimated by the National Museum of Natural History as about 2 to 5 kg (4.4 to 11.0 lb).

All content from Kiddle encyclopedia articles (including the article images and facts) can be freely used under Attribution-ShareAlike license, unless stated otherwise. Cite this article:
Dinosaur size Facts for Kids. Kiddle Encyclopedia.