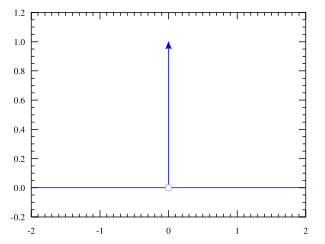 Schematic representation of the Dirac delta function by a line surmounted by an arrow. The height of the arrow is usually used to specify the value of any multiplicative constant, which will give the area under the function. The other convention is to write the area next to the arrowhead.

, is a made-up concept by mathematician Paul Dirac. It is a really pointy and skinny function that pokes out a point along a wave. Loosely speaking, it has the value of zero everywhere except at

, in such a way that the area between the function and the x-axis adds up to 1. The delta function is often used in sampling theory, where its pointiness is useful for getting clean samples.

All content from Kiddle encyclopedia articles (including the article images and facts) can be freely used under Attribution-ShareAlike license, unless stated otherwise. Cite this article:
Dirac delta function Facts for Kids. Kiddle Encyclopedia.