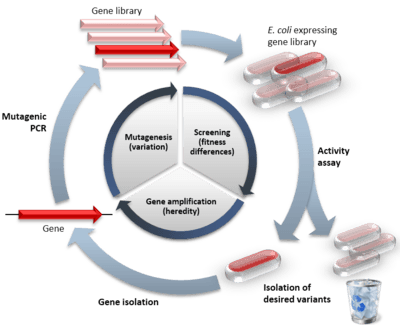 Directed evolution (DE) is a method used to produce enzymes for industrial or medical purposes.

The method is protein engineering which mimics natural selection.

The basic idea is to put a gene through repeated rounds of mutation, to make a library of variants. Selection isolates genes with the desired function. They are a template for the next round.

This can be done in vivo (in living cells of bacteria or yeast), or in vitro (free in solution or microdroplets).

Testing more mutants increases the chances of finding one with the desired properties.

During in vivo evolution, each cell (usually bacteria or yeast) is transformed with a plasmid containing a different member of the variant library. Only the gene of interest differs between the cells, with all other genes being kept the same.

The cells express the protein either in their cytoplasm or surface where its function can be tested. This format has the advantage of selecting for properties in a cellular environment, which is useful when the evolved protein or RNA is to be used in living organisms.

When done without cells, DE uses in vitro transcription translation to produce proteins or RNA free in solution or inside artificial microdroplets. This has the benefit of allowing more conditions (e.g. temperature, solvents). It can express proteins that would be toxic to cells. Furthermore, in vitro evolution experiments can generate far larger libraries (up to 1015) because the library DNA need not be inserted into cells. That often limits what can be done.

An expressed protein can be covalently linked to its gene (as in mRNA), left, or put in the same compartment with it, right.
Either way the gene which codes for the protein is isolated

When functional proteins have been isolated, it is necessary that their genes are too, therefore a genotype-phenotype link is required.

This can be covalent, where the mRNA gene is linked to the protein at the end of translation by puromycin.

Alternatively the protein and its gene can be kept together, or in emulsion droplets. The gene sequences isolated are then multiplied by PCR or by transformed host bacteria. Either the single best sequence, or a pool of sequences can be used as the template for the next round of mutagenesis. The repeated cycles of diversification-selection-amplification make enzyme variations adapted to the selection process.

All content from Kiddle encyclopedia articles (including the article images and facts) can be freely used under Attribution-ShareAlike license, unless stated otherwise. Cite this article:
Directed evolution Facts for Kids. Kiddle Encyclopedia.