Dissected Till Plains facts for kids 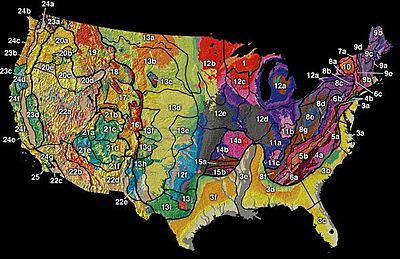 The Dissected Till Plains are physiographic parts of the Central Lowlands province. In turn, those are part of the Interior Plains physiographic part of the United States. They are in southern and western Iowa, northeastern Kansas, the southwestern corner of Minnesota, northern Missouri, eastern Nebraska, and southeastern South Dakota.

The Dissected Till Plains were created by pre-Wisconsin glaciers during the Pre-Illinoian Stage. Glacial scouring and deposition by the Laurentide ice sheet and the later accumulation of loess during the Wisconsin Stage created the rolling hills and good, healthy dirt in the region.

The region is also the western edge of the Corn Belt.

All content from Kiddle encyclopedia articles (including the article images and facts) can be freely used under Attribution-ShareAlike license, unless stated otherwise. Cite this article:
Dissected Till Plains Facts for Kids. Kiddle Encyclopedia.