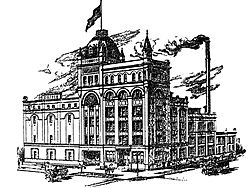 The Dixie Brewing Company is a regional brewery founded in New Orleans, Louisiana on October 31, 1907. The brewing operation was located on Tulane Avenue until 2005 when it closed due to Hurricane Katrina. Beer was contract brewed out-of-state until November 2019 when a new brewery opened in New Orleans.

Dixie Brewing was founded by Valentine Merz, and began production in 1907. The original brick Dixie Brewery building at 2401 Tulane Avenue at the corner of Tulane Avenue and Tonti Street was designed by the German architect Louis Lehle and completed in 1907 with a wooden extension added in 1919. During Prohibition, the company became the "Dixie Beverage Company."

In 1983, Dixie was sold to a New Orleans based corporation, Coy International. In November 1985, it was purchased by Joseph and Kendra Elliott Bruno and in 1989 its owners filed for Chapter 11 bankruptcy. After emerging reorganized in 1992, the brewery produced a new line of speciality beers, Blackened Voodoo (a dark lager), Crimson Voodoo (a red ale) and in 1993 introduced Jazz Amber Light. 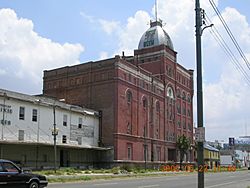 In 2005, the Dixie Brewery was severely damaged when Mid-City New Orleans flooded from the levee failure disaster during Hurricane Katrina. After the area was drained the brewery complex was looted with much of the equipment stolen. Despite early post-Katrina claims that the brewery would be restored and efforts being made to encourage local government to support the return of the brewery, it never reopened. With the closing of the original brewery, Dixie Beer’s production was contract brewed at Joseph Huber Brewing Company in Monroe, Wisconsin.

When the brewery didn't reopen on Tulane Avenue, the closed brewery building was incorporated into the footprint of the new Department of Veterans Affairs hospital built in New Orleans' Mid-City neighborhood. During restoration, the focus was on stabilizing the structure. Liz Failla, project coordinator for the VA said, "Right now, what we're doing is stabilizing the structure that we're going to maintain, which is that iconic tower with the Dixie Brewery on there." The design preserves and repairs the six- and four-story sections of the old brewery. Failla also said a modern brick and glass structure will rise from behind the historic facade.

On August 7, 2018, it was announced a new Dixie Brewery will be built in Eastern New Orleans featuring a replica of the brick tower at Dixie's original brewery and metal letters that were removed from the exterior of the original brewery. The brewery and taproom were built in an 80,000-square-foot portion of an existing warehouse located on a 14-acre property. A private event space above the taproom has a bar made from a vintage fermenting tank also removed from the original brewery. A kitchen off the taproom offers bar snacks and food, while the area just past the on-site beer garden hosts food trucks. The property also includes a beer museum, a grassy meadow with a pond, walking paths, fire pits and an area for yard games.

In June 2019, Dixie Beer's production was moved from Monroe, Wisconsin to the Blues City Brewery in Memphis, Tennessee before its return to New Orleans.

On November 25, 2019, the Dixie Brewing Company began brewing at their new brewery in New Orleans, marking the first time Dixie was brewed in New Orleans since 2005. On January 25, 2020, the brewery had its official groundbreaking and the facility opened to the public. Benson announced a contest to change the name of the Brewery due to her offense to the name Dixie.

All content from Kiddle encyclopedia articles (including the article images and facts) can be freely used under Attribution-ShareAlike license, unless stated otherwise. Cite this article:
Dixie Brewing Company Facts for Kids. Kiddle Encyclopedia.