Dixie Virginia Carter (May 25, 1939, McLemoresville, Tennessee – April 10, 2010, Houston, Texas), was an American movie, television and stage actress. She was best known for playing Julia Sugarbaker in the television series Designing Women (1986-1993). She competed in Miss Tennessee pageants in 1959.

Carter was born in McLemoresville, Tennessee, and spent many of her early years in Memphis. She attended college at the University of Tennessee at Knoxville and Southwestern at Memphis (now Rhodes College). She was a graduate of Memphis State with a degree in English. 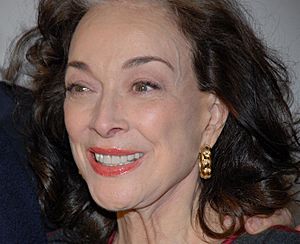 She divorced Arthur Carter in 1977, and married Broadway and TV actor George Hearn the same year. Two years later, in 1979, she divorced Hearn. She married for the third time on May 27, 1984, to Hal Holbrook (14 years her senior), who is most noted for his appearances as Mark Twain. Carter renovated her old family home in McLemoresville with the designs of architect Hoyte Johnson of Atlanta.

She and Holbrook divided their time between their homes in Beverly Hills, California, and McLemoresville, Tennessee, where Carter's elderly father, Halbert, resided until his death in early 2007, at age 96.

Carter died on April 10, 2010, in Houston, Texas. Her death was announced by her husband, actor Hal Holbrook, who stated the cause as complications from endometrial cancer which was diagnosed earlier in 2010. In addition to Holbrook, she is survived by her daughters from her first marriage: Ginna Carter (of Los Angeles) and Mary Dixie Carter (of Brooklyn) as well as a sister, Melba Helen Heath (of San Anselmo, California) and several nephews and nieces. In addition to family, her funeral, held on April 15, 2010, was attended by Designing Women co-stars Delta Burke, Annie Potts and Jean Smart. Dixie Carter was interred in her hometown, McLemoresville, Tennessee.

All content from Kiddle encyclopedia articles (including the article images and facts) can be freely used under Attribution-ShareAlike license, unless stated otherwise. Cite this article:
Dixie Carter Facts for Kids. Kiddle Encyclopedia.