Holbrook was born in Cleveland, Ohio. He began acting in 1954. He began his Mark Twain routine, so that he can earn money.

Holbrook soon began appearing on plays. He then called his Twain show Mark Twain Tonight. He is also known for his fictional-political shows and as "Deep Throat" in All the President's Men. He also played Abraham Lincoln in several biographical television movies.

Holbrook was nominated for many awards during his career. He is the oldest actor to have nominated for an Academy Award for Best Supporting Actor.

Holbrook was born on February 17, 1925 in Cleveland, Ohio. His parents were Harold Rowe Holbrook and Aileen Davenport. His parents left him, so he and his two sisters were raised by his grandparents in South Weymouth, Massachusetts. He studied at Culver Academies and at Denison University. His acting career would begin in theater in 1954. 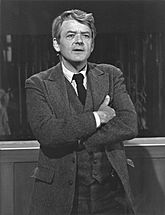 Holbrook is known for his television roles. These include Abraham Lincoln, Hays Stone in The Bold Ones: The Senator and Capt. Lloyd Bucher in Pueblo. But he is best known as Mark Twain in comedy stage works and comedy shows. His first solo performance as Twain was at Lock Haven State Teachers College in Pennsylvania in 1954. Holbrook had to smoke for his role as Twain. He would later name that play Mark Twain Tonight. He has portrayed Twain longer than Samuel Langhorne Clemens did.

Holbrook first appeared in movies in 1966, in The Group. After this, he appeared in two more movies: Magnum Force in 1973 and All the President's Men in 1976. Later, he appeared in The Fog, Wall Street, Hercules, The Bachelor, and in Walking the Dead.

He is also known for his role in the 2007 movie Into the Wild, for which he was nominated for a Screen Actors Guild Award and an Academy Award. He also appeared in Water for Elephants in 2011.

Later he has appeared as Francis Preston Blair in Steven Spielberg's movie Lincoln in 2012. He appeared during the opening ceremony of the 2013 Screen Actors Guild Awards.

Holbrook starred in the 2014 animated movie Planes 2: Fire & Rescue as a fire truck named Mayday. Holbrook is set to star in the 2015 thriller movie Go with Me along with Anthony Hopkins. 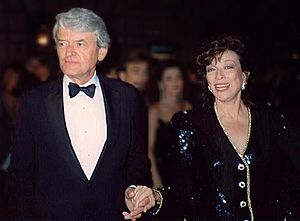 Holbrook and Dixie Carter at the 41st Emmy Awards, 1990

Holbrook met Carter on the set of The Killing of Randy Webster in 1980. Holbrook now lives in McLemoresville, Tennessee, and in Beverly Hills, California. Holbrook has stated that he is a political independent because he votes for both Democrats and Republicans.

Holbrook has won three Tony Awards, in 1971, 1974, and in 1976. He won a Drama Desk Award in 1989. He also won a Primetime Emmy Award in 1966. He was nominated for an Academy Award and a Screen Actors Guild Award in 2007 for his role in Into the Wild. In 2008, at age 82, he became the oldest male actor to be nominated for an Academy Award. His nomination displaced Ralph Richardson, who previously held that distinction. Here is the list of nominations or winning awards: 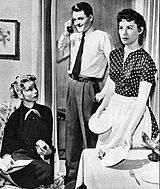 All content from Kiddle encyclopedia articles (including the article images and facts) can be freely used under Attribution-ShareAlike license, unless stated otherwise. Cite this article:
Hal Holbrook Facts for Kids. Kiddle Encyclopedia.