Catherine Louise Sagal (born January 19, 1954) is an American actress and singer-songwriter. She is known for playing Peggy Bundy on Married... with Children, Leela on Futurama, and Cate Hennesy on 8 Simple Rules. In the latter role, Sagal worked with John Ritter until his death, leading to Sagal's taking over as the series lead for the remainder of the show's run.

She is also widely known for her role as Gemma Teller Morrow on the FX series Sons of Anarchy, for which she won the Golden Globe Award for Best Actress – Television Series Drama in 2011.

Sagal was born in California to a show business family of five children. Her younger sisters Jean and Liz Sagal. They are a pair of twins who also act. Her brother is actor Joe Sagal. Her mother, Sara Zwilling was a writer and producer. Sagal's father, Boris Sagal was a director. Sagal grew up in Brentwood, Los Angeles.

Sagal began her career in Hollywood. She was in many made for TV movies between 1971 and 1975. These included a small role as a receptionist in the Columbo episode Candidate for Crime which was directed by her father. In 1973, she also worked as a backing vocalist for different singers, including Bob Dylan and Tanya Tucker. 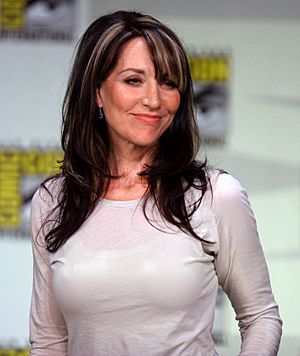 In 1978, Kiss bassist Gene Simmons asked her to sing background vocals on his solo album. During this time she was also a member of the rock group The Group With No Name. She also sang backup for Bette Midler. Midler hired her for her 1979 tour as one of The Harlettes. In 1981, Sagal was a backup singer on the Molly Hatchet album Take No Prisoners.

Sagal returned to television in 1985. She was in the series Mary starring Mary Tyler Moore. This led to her being cast as Peggy Bundy on the sitcom Married... with Children (1987–1997). The series was broadcast for eleven years.

After the end of Married... with Children, Sagal did many more television movies. She also did some acting on children's cartoon Recess. She played the voice of Spinelli's mother. In 1999, Matt Groening cast her as the cyclopian spaceship captain, Leela, in his science fiction cartoon comedy Futurama. The show had a cult following but was ended after five years.

Sagal guest starred as Edna Hyde, Steven Hyde's mother, in three episodes of That '70s Show. She was also in the NBC sitcom Tucker.

All content from Kiddle encyclopedia articles (including the article images and facts) can be freely used under Attribution-ShareAlike license, unless stated otherwise. Cite this article:
Katey Sagal Facts for Kids. Kiddle Encyclopedia.