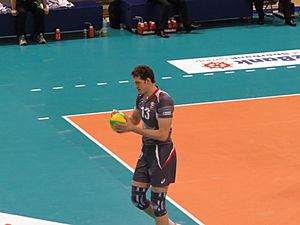 Dmitriy Muserskiy (born 29 October 1988) is a Russian volleyball player. He is originally from Ukraine. He is a member of the Russian men's national volleyball team and the Russian club Belogorie Belgorod. He competed in the Olympic Games in 2012, European Championships in 2013, the World Cup in 2011, and the World League.

All content from Kiddle encyclopedia articles (including the article images and facts) can be freely used under Attribution-ShareAlike license, unless stated otherwise. Cite this article:
Dmitriy Muserskiy Facts for Kids. Kiddle Encyclopedia.