Dmitry Alexeevich Glukhovsky (Russian: Дми́трий Алексе́евич Глухо́вский, Hebrew: ‏דמיטרי אלכסייביץ' גלוכובסקי‏, born 12 June 1979) is a Russian-Israeli author and journalist best known for the science fiction novel Metro 2033 and its sequels. As a journalist, Dmitry Glukhovsky has worked for EuroNews, RT, among others. Glukhovsky has lived in Israel, Germany and France but currently lives in Moscow.

Dmitry Glukhovsky was born and raised in Moscow to an intelligentsia family. He graduated from a school in Arbat District and, having already decided to become a writer, conceived the idea for Metro 2033 at the age of 15. At the age of 17, he left Russia to study in Israel and lived there for four and a half years. While living in Israel he learned Hebrew, and earned a university degree in Journalism and International Relations at the Hebrew University in Jerusalem. He completed this degree in Hebrew, no differently to native-language Israeli students most of whom were five years older than him. While talking about the experience, he said: "I have become a fan of Israel after living there, not that I started feeling myself a Jew, but I definitely started feeling an Israeli."

Glukhovsky began writing Metro 2033 as his first novel at the age of 18, and then published it on his website in 2002, available for all to read for free as an interactive experiment. First published in print form in 2005, the book and its sequels turned into a multimedia franchise including a video game series. It was followed by Metro 2034 in 2009, which was also available for free online, both as text and as a collaborative art-project with Russian electronic performer Dolphin and visual artist Anton Gretchko.

From 2002 to 2007, he worked at the global European media platform EuroNews in Lyon, France, after which he returned to Russia and continued his career at the newly-created Russia Today. Over the course of three years he travelled halfway around the world, was a Kremlin pool journalist, visited the Baikonur Cosmodrome and the exclusion zone of the Chernobyl nuclear power plant, as well as the North Pole, from which he made the world's first direct telecast in July 2007. He has also worked with the German radio station Deutsche Welle and the British television channel Sky News. From 2007 to 2009, he worked at Radio Mayak. He covered the 2006 Lebanon War as a war correspondent, writing reports under mortar shelling. 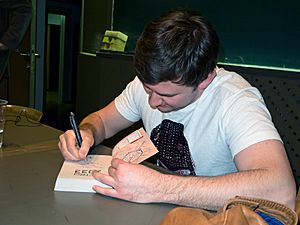 Dmitry Glukhovsky signing a copy of Metro 2033 at SFeraKon 2012.

Metro Last Light: The Gospel According to Artyom

In 2013, the publisher Dark Horse Comics announced a short tie-in comic set in between the games Metro 2033 and Metro: Last Light. It was exclusively available for customers who pre-ordered Metro: Last Light on Steam. However, despite the initial announcement and the involvement of the game's developer 4A Games on the comic, the comic itself cited the story as being set in between the novels Metro 2033 and Metro 2035. Glukhovsky is credited for the story, while Landry Walker is cited as being responsible for the script, with Paul Azaceta handling the art.

The novel Dusk was published in 2007. It is a dark tale of the translator Dmitry who receives an order for translations of a dozen pages cut out of what seems to be a several centuries-old Spanish book. He discovers that the book is a journal of an expedition of the Conquistadors dating back to the 16th century. Dmitry is reading this story chapter by chapter, collecting the full translation at home. Finally, the story starts penetrating his reality and threatening his life. Dusk was also an online experiment as Glukhovsky was publishing it chapter by chapter in his blog.

Tales About the Motherland

In 2010, the AST publishing house released a new book by Glukhovsky, Tales About the Motherland, a compilation of satirical stories about Russian realities.

Future is a dystopian novel published in September 2013 in Russia. The story is set in Europe in the 25th century when humanity has invented a way to stop aging. In order to keep Europe from overflowing, the government was forced to introduce a policy whereby if a couple decide to have a child either the mother or the father would have to give up their immortality. The story is built around a young man who is part of a squad in charge of stopping the overpopulation of Europe by punishing those who do not register their child.

Text is Glukhovsky's first realistic (not the typical sci-fi) novel, published in 2017.

Glukhovsky collaborated with 4A Games in the development of the game. While he did not write the game's story, it is based on his novel.

It is not based on Metro 2034, because the developers felt it was less fit for a game than the original book. Glukhovsky helped to write the story and dialogue for the game. He realized that the story he wrote for the game was too big, so instead he published the whole story in a new book in 2015, titled Metro 2035.

The writer was married to producer Elena Glukhovskaya, whom he met while working at Russia Today. The couple have two children. On VDud, Glukhovsky revealed he and Elena divorced earlier in 2020.

All content from Kiddle encyclopedia articles (including the article images and facts) can be freely used under Attribution-ShareAlike license, unless stated otherwise. Cite this article:
Dmitry Glukhovsky Facts for Kids. Kiddle Encyclopedia.