Dobos torte or Dobosh ( Hungarian: Dobos torta) is a Hungarian sponge cake layered with chocolate buttercream and topped with caramel. The layered pastry is named after its inventor, Hungarian chef József C. Dobos, a delicatessen owner in Budapest. In the late 1800s, he decided to create a cake that would last longer than other pastries in an age when cooling techniques were limited. The round sides of the cake are coated with ground hazelnuts, chestnuts, walnuts, or almonds, and the hardened caramel top helps to prevent drying out, for a longer shelf life. 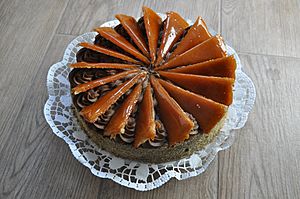 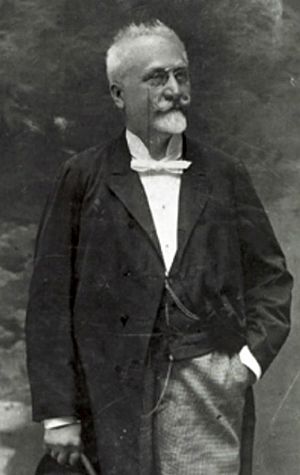 Dobos torte was first introduced at the National General Exhibition of Budapest in 1885; Emperor Franz Joseph I and Empress Elisabeth were among the first to taste it. The cake soon became popular throughout Europe, both for its durability through shipping and for its unique appearance. With its flat, shiny, caramel glazed top, it was simple but elegant, as opposed to the more intricate cakes of the age. Its use of fine chocolate buttercream was very little known at the time because cake fillings and frostings were usually made with cooked pastry cream or whipped cream. Dobos had discovered buttercream while traveling in France, but he invented the batter of the cake.

The cream incorporated cocoa butter for extra smoothness. During his lifetime, the cake was often imitated, but never reproduced. Dobos traveled to other countries in Europe to introduce his cake, and soon began exporting the product in specially designed wooden boxes. Near the end of his career, in 1906, Dobos donated his recipe to the Pastry and Honey-Makers' Guild.

All content from Kiddle encyclopedia articles (including the article images and facts) can be freely used under Attribution-ShareAlike license, unless stated otherwise. Cite this article:
Dobos torte Facts for Kids. Kiddle Encyclopedia.