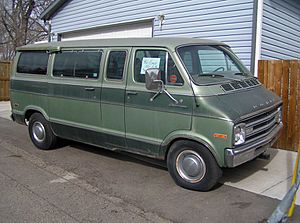 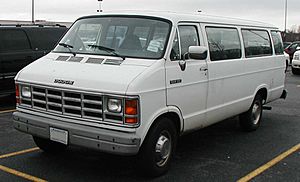 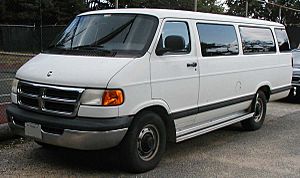 The Dodge B-Series were a series of passenger or cargo vans which began around 1971 and ended in 2003. These vans were full sized. They had the names of Sportsman for the passenger van. The cargo vans were named Dodge Tradesman. This was before 1979, beginning in which year these vehicles were renamed Dodge Ram. The vehicles were marketed under Dodge. The B-Series vans were discontinued in June 2003 and replaced with the Dodge Sprinter, a rebadged Mercedes which was already on sale since 2002.

All content from Kiddle encyclopedia articles (including the article images and facts) can be freely used under Attribution-ShareAlike license, unless stated otherwise. Cite this article:
Dodge Ram Van Facts for Kids. Kiddle Encyclopedia.