Doggie Diner was a small fast food restaurant chain serving hot dogs and hamburgers in San Francisco and Oakland, California that operated from 1948 to 1986, owned by Al Ross. The first Doggie Diner was opened on Oakland's San Pablo Avenue in 1948 and grew in popularity. At one time there were 30 locations around the San Francisco Bay Area, mostly concentrated in San Francisco. The chain went out of business in 1986 after trying to compete with big chain restaurants, such as McDonald's and Burger King. Its founder Al Ross died in 2010, at age 93. 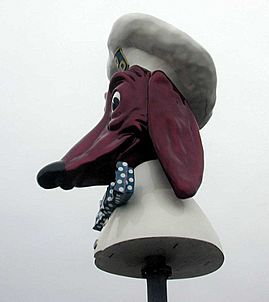 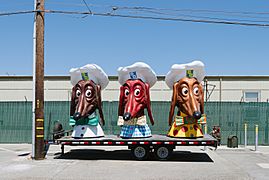 The Doggie Diner Heads, as found in 2017

The most notable feature of the Doggie Diner chain was the sign: a 7-foot-tall (2.1 m) rotating fiberglass head of a wide-eyed, grinning dachshund, wearing a bow tie and a chef's hat. These famous dog head signs were designed in 1965 or 1966 by Bay Area billboard and ad layout designer Harold Bachman. After the Doggie Diner went out of business, all the large dog head signs were taken down and many were resold to private parties. In 2001, one of the dog signs, restored and refurbished by the city of San Francisco, was installed on a median strip at Sloat Boulevard and 45th Avenue, near San Francisco's Ocean Beach and the San Francisco Zoo in the Outer Sunset neighborhood. On August 11, 2006, the Doggie Diner dog head became a San Francisco landmark No. 254.

All content from Kiddle encyclopedia articles (including the article images and facts) can be freely used under Attribution-ShareAlike license, unless stated otherwise. Cite this article:
Doggie Diner Facts for Kids. Kiddle Encyclopedia.