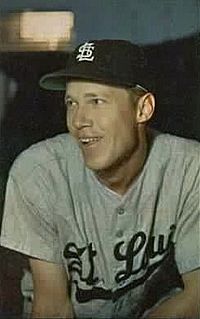 Donald Eugene "Don" Lenhardt (October 4, 1922 – July 9, 2014), nicknamed "Footsie", was an American baseballer. He was an outfielder, first baseman, third baseman, scout and coach in Major League Baseball. He played for the St. Louis Browns, the Chicago White Sox, the Boston Red Sox and the Detroit Tigers between 1950 and 1954.

Lenhardt was born in Alton, Illinois. He was nicknamed "Footsie" by teammates because he often had a hard time finding shoes that fit him right.

All content from Kiddle encyclopedia articles (including the article images and facts) can be freely used under Attribution-ShareAlike license, unless stated otherwise. Cite this article:
Don Lenhardt Facts for Kids. Kiddle Encyclopedia.