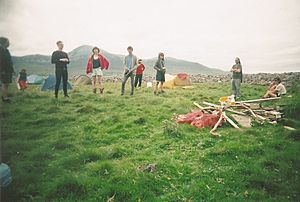 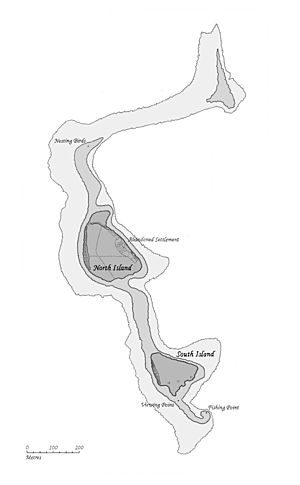 The island was previously owned by John Lennon, who purchased the island in 1967 for £1,700. Previously used by sailing ships for its stones, the island became a place of peace for Lennon and his family. After his divorce from wife Cynthia, the island went unused until Lennon invited "King of the Hippies" Sid Rawle and Timi Walsh to establish a commune on the island in 1970. For the next two years, a group of 25 hippies called Dorinish home. In 1972 a fire burned down the island's supply tent and the commune disbanded. After Lennon's death, Yoko Ono sold the island for nearly £30,000 and donated the proceeds to an Irish orphanage. Dorinish is now used as a grazing site for livestock and is sometimes visited by enthusiastic Beatles fans. An artists' summer school "Aerial Blue" was held on the island in July 2011.

All content from Kiddle encyclopedia articles (including the article images and facts) can be freely used under Attribution-ShareAlike license, unless stated otherwise. Cite this article:
Dorinish Facts for Kids. Kiddle Encyclopedia.