Dornier Do 17 facts for kids 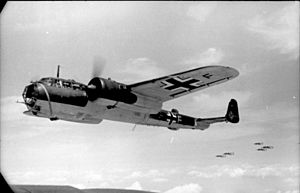 Dornier Do 17 in flight.

The Dornier Do 17 is a Nazi German military aircraft. It was used for the World War II as a bomber, night fighter, and reconnaissance plane. It's a twin-engines aircraft. It was used by Luftwaffe for Battle of France and after Battle of Britain. Maiden flight in 1934. More than 2100 examples were built. Do 217 and Do 317 are modern variants of it.

It was nicknamed the “flying pencil” for its thin fuselage. It’s successors, the Do-215 and Do-217, would inherit this nickname.

All content from Kiddle encyclopedia articles (including the article images and facts) can be freely used under Attribution-ShareAlike license, unless stated otherwise. Cite this article:
Dornier Do 17 Facts for Kids. Kiddle Encyclopedia.