Dorothy was a small town in Section 5, Louisville Township, Red Lake County, Minnesota. It is now a virtual ghost town.

Dorothy initially was established as a railroad station in 1916-17 after the Northern Pacific Railway extended its line from Tilden Junction to Winnipeg and built a spur through Red Lake Falls. The new town sucked away what was left of the historic river crossing town, Huot, and for a time sputtered toward prosperity, boasting a grain elevator, a Catholic church, a school and several houses. 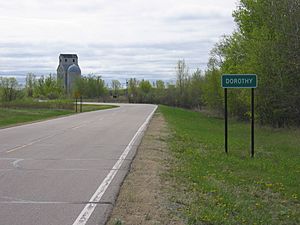 The post office in Dorothy was first established February 11, 1898, with Joseph H. Mathews as postmaster. It was finally discontinued in 1945.

The Federal Writers' Project reported in 1938 that the town had a population of 25, and "a beautiful church with stained-glass windows". Sometime in the early 1970s, the railroad was abandoned and the grain elevator closed, and with it, the town's reason for existence was gone. By 2007, the church had been abandoned and appeared to be in use as a residence.

On October 24, 2014, the old church caught fire and burned to the ground in a conflagration that apparently started after embers from a pile of leaves a property owner was burning nearby blew towards the building, igniting the structure, which was a total loss. 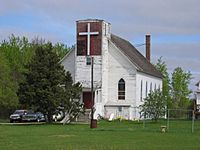 All content from Kiddle encyclopedia articles (including the article images and facts) can be freely used under Attribution-ShareAlike license, unless stated otherwise. Cite this article:
Dorothy, Minnesota Facts for Kids. Kiddle Encyclopedia.