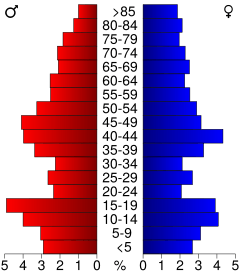 Red Lake County is a county located in the U.S. state of Minnesota. As of the 2010 census, the population was 4,089, making it the third-least populous county in Minnesota. Its county seat is Red Lake Falls.

On August 17, 2015, the Washington Post, citing a 1999 U.S. Department of Agriculture index of “natural aspects of attractiveness,” named Red Lake County “the absolute worst place to live.”  The reporter, Christopher Ingraham, visited the county later that month at the invitation of a local businessman. In subsequent articles, Ingraham declared that “the Red Lake County region is flat-out gorgeous” and later decided to move there.

Red Lake County was formed on December 24, 1896 from sections of Polk County. It was named after the Red Lake River.

The county has two sites on the National Register of Historic Places: the courthouse and Clearwater Evangelical Lutheran Church.

Despite its name, Red Lake County contains only one named lake: Moran Lake, near Huot.

Red Lake County is the only landlocked county in the United States (excluding those on international borders) to border exactly two other counties.

All content from Kiddle encyclopedia articles (including the article images and facts) can be freely used under Attribution-ShareAlike license, unless stated otherwise. Cite this article:
Red Lake County, Minnesota Facts for Kids. Kiddle Encyclopedia.