Lake Pleasant Township is a township in Red Lake County, Minnesota, United States. The population of the township was 126 at the 2000 census. The unincorporated community of Marcoux or Marcoux Corner is located within the township.

Lake Pleasant Township took its name from a former lake which has since been drained.

According to the United States Census Bureau, the township has a total area of 35.9 square miles (93 km2), all of it land.

There were 41 households out of which 41.5% had children under the age of 18 living with them, 75.6% were married couples living together, 7.3% had a female householder with no husband present, and 14.6% were non-families. 14.6% of all households were made up of individuals and 4.9% had someone living alone who was 65 years of age or older. The average household size was 3.07 and the average family size was 3.37. 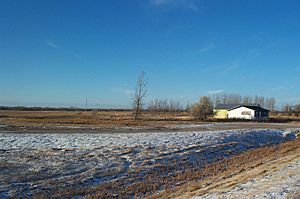 Marcoux Corner was a prominent landmark on an otherwise bleak stretch of U.S. Highway 2 in Polk County, between Mentor and Crookston at the intersection with Minnesota Highway 32. At this spot, originally settled by Edward Joseph Marcoux in 1927, a roadhouse and tavern were established in a former school building relocated in the late 1930s from Cisco in Badger Township, which remained in operation throughout the latter half of the 20th century. After passing through more than a dozen owners, the business closed in 2001. Shortly thereafter, the building was burned down intentionally by the fire department. A regionally popular a cappella singing group whose members hail from Fargo, Anoka and Crookston has taken its name, "Marcoux Corner", from the former watering hole. Kevin Taylor, Marcoux Corner's lead tenor, took a notorious second place in a texting competition in Minot, North Dakota in 2007.