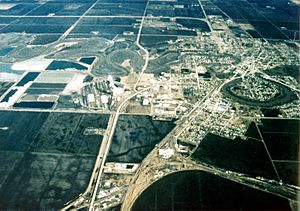 Aerial view of Crookston, Minnesota, with the Red Lake River twisting through the town

Crookston is a city in the U.S. state of Minnesota. It is the county seat of Polk County. The population was 7,891 at the 2010 census. It is part of the "Grand Forks, ND–MN Metropolitan Statistical Area" or "Greater Grand Forks".

Crookston is the episcopal seat of the Roman Catholic Diocese of Crookston. Since Crookston is close to the larger city of Grand Forks, North Dakota, many people who live in Crookston commute to jobs in the Grand Forks area.

The area in which Crookston is located was virtually unoccupied during pre-European contact and remained little more than a hunting ground associated with the Pembina settlements until the 1860s. The land in the immediate vicinity of Crookston is not connected with any verifiable Native American or European historic events or circumstances until transfer in the Treaties of Old Crossing in 1863-64. Prior to that time, the territory now included in Crookston was technically a part of Rupert's Land and Assiniboia before becoming part of the United States as a result of the boundary settlement in the Treaty of 1818.

The area in which Crookston is located was traversed by trappers and traders including Ojibwa and Lakota Indians, Métis, and other mixed-race people as well as white men between 1790 and 1870. A branch of the Red River Trails passed nearby; it was used by fur traders between the 1840s and 1870s.

The present day site of Crookston first saw settlement by non-Indian people around 1872. It was the site of a federal land office by 1876 and sited on a portion of the Great Northern Railway which began operations prior to 1880. The town was incorporated on April 1, 1879 as "Queen City". By the end of that year, the town boasted a jail, graded streets, and a few plank sidewalks. Soon, it was decided that the town needed a new name. Two factions emerged that supported two different names. One group wished to honor the town's first mayor, Captain Ellerey C. Davis, by renaming "Queen City" to "Davis." Another group picked the name Crookston to honor Colonel William Crooks, a soldier and railroad builder. The present day name was reportedly chosen by means of a coin toss.

Soon, immigrants from Scandinavia and Germany began populating Crookston. At one point, eight different railroad lines reached Crookston and the town became a center of commerce and manufacturing.

Crookston has not seen a major period of population growth for quite some time and the economy has suffered from increased competition from nearby Grand Forks, North Dakota. In what has been a socioeconomic marker of sorts in the US, a Wal-Mart opened in Crookston in 2007.

Crookston has a relatively flat landscape. The Red Lake River flows through the city and makes several twists and turns (oxbows). Crookston has experienced some erosion of the riverbank. A recent minor landslide has led the city to seek a permanent solution to such problems.

Crookston is the northern terminus of the Agassiz Recreational Trail, a 53-mile multi-use trail built on an abandoned railroad grade which has its southern terminus at Ulen. According to the United States Census Bureau, the city has a total area of 5.15 square miles (13.34 km2), all of it land.

There were 3,109 households of which 28.5% had children under the age of 18 living with them, 40.3% were married couples living together, 11.1% had a female householder with no husband present, 4.7% had a male householder with no wife present, and 43.9% were non-families. 36.7% of all households were made up of individuals and 13.3% had someone living alone who was 65 years of age or older. The average household size was 2.27 and the average family size was 2.97.

There were 3,078 households, of which 30.5% had children under the age of 18 living with them, 46.5% were married couples living together, 9.6% had a female householder with no husband present, and 40.9% were non-families. 34.5% of all households were made up of individuals and 15.5% had someone living alone who was 65 years of age or older. The average household size was 2.37 and the average family size was 3.10.

Crookston is home to the Grand Theater, the oldest continuously operating movie theater in the United States. It was originally an opera house and played host to legendary entertainers including author Mark Twain, Harry Houdini, and early film actress Mary Pickford.

All content from Kiddle encyclopedia articles (including the article images and facts) can be freely used under Attribution-ShareAlike license, unless stated otherwise. Cite this article:
Crookston, Minnesota Facts for Kids. Kiddle Encyclopedia.