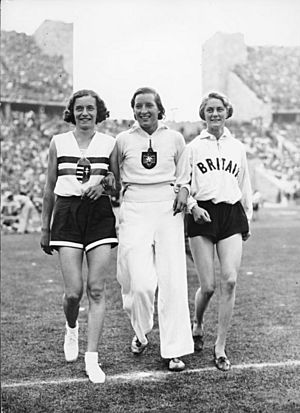 Dorothy Jennifer Beatrice Tyler MBE (née Odam; 14 March 1920 – 25 September 2014) was a British athlete. She competed mainly in the high jump. She won two silver medals at the Summer Olympic Games. One at the 1936 Summer Olympics held in Berlin, Germany, and the other at the 1948 Summer Olympics held in London. She was the first British woman to win an Olympic athletics medal herself. She later went on to win a gold medal at two British Empire Games; one in Sydney, New South Wales, Australia (1938), and the other in Auckland, New Zealand (1950). In 2012, she was a starting runner at the London Marathon.

Tyler-Odam was born in Stockwell, London. In 2009, at the age of 89, she was made a Member of the Order of the British Empire (MBE).

All content from Kiddle encyclopedia articles (including the article images and facts) can be freely used under Attribution-ShareAlike license, unless stated otherwise. Cite this article:
Dorothy Tyler-Odam Facts for Kids. Kiddle Encyclopedia.