In mathematics, the dot product is an operation that takes two vectors as input, and that returns a scalar number as output. The number returned is dependent on the length of both vectors, and on the angle between them. The name is derived from the centered dot "·" that is often used to designate this operation; the alternative name scalar product emphasizes the scalar (rather than vector) nature of the result.

The dot product contrasts (in three dimensional space) with the cross product, which produces a vector as result.

where Σ denotes summation notation ( the sum of all the terms) and n is the dimension of the vector space. 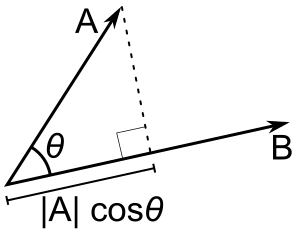 where ||a|| denotes the length (magnitude) of a. More generally, if b is another vector

This formula can be rearranged to determine the size of the angle between two nonzero vectors:

One can also first convert the vectors to unit vectors by dividing by their magnitude:

then the angle θ is given by

As the cosine of 90° is zero, the dot product of two orthogonal(perpendicular) vectors is always zero. Moreover, two vectors can be considered orthogonal if and only if their dot product is zero, and they both have a nonzero length. This property provides a simple method to test the condition of orthogonality.

Sometimes these properties are also used for defining the dot product, especially in 2 and 3 dimensions; this definition is equivalent to the above one. For higher dimensions the formula can be used to define the concept of angle.

The geometric properties rely on the basis being orthonormal, i.e. composed of pairwise perpendicular vectors with unit length.

If both a and b have length one (i.e., they are unit vectors), their dot product simply gives the cosine of the angle between them.

Then the rotation from B1 to B2 is performed as follows:

Notice that the rotation matrix R is assembled by using the rotated basis vectors u1, v1, w1 as its rows, and these vectors are unit vectors. By definition, Ra1 consists of a sequence of dot products between each of the three rows of R and vector a1. Each of these dot products determines a scalar component of a in the direction of a rotated basis vector (see previous section).

If a1 is a row vector, rather than a column vector, then R must contain the rotated basis vectors in its columns, and must post-multiply a1:

The following properties hold if a, b, and c are real vectors and r is a scalar.

The dot product is commutative:

The dot product is distributive over vector addition:

The dot product is bilinear:

When multiplied by a scalar value, dot product satisfies:

(these last two properties follow from the first two).

Two non-zero vectors a and b are perpendicular if and only if a • b = 0.

Unlike multiplication of ordinary numbers, where if ab = ac, then b always equals c unless a is zero, the dot product does not obey the cancellation law:

Provided that the basis is orthonormal, the dot product is invariant under isometric changes of the basis: rotations, reflections, and combinations, keeping the origin fixed. The above mentioned geometric interpretation relies on this property. In other words, for an orthonormal space with any number of dimensions, the dot product is invariant under a coordinate transformation based on an orthogonal matrix. This corresponds to the following two conditions:

This is a very useful identity (also known as Lagrange's formula) involving the dot- and cross-products. It is written as

which is easier to remember as "BAC minus CAB", keeping in mind which vectors are dotted together. This formula is commonly used to simplify vector calculations in physics.

Proof of the geometric interpretation

Consider the element of Rn

Repeated application of the Pythagorean theorem yields for its length |v|

But this is the same as

so we conclude that taking the dot product of a vector v with itself yields the squared length of the vector.

Now consider two vectors a and b extending from the origin, separated by an angle θ. A third vector c may be defined as

creating a triangle with sides a, b, and c. According to the law of cosines, we have

Substituting dot products for the squared lengths according to Lemma 1, we get

which, according to the distributive law, expands to

. Due to the geometric interpretation of the dot product the norm ||a|| of a vector a in such an inner product space is defined as

such that it generalizes length, and the angle θ between two vectors a and b by

In particular, two vectors are considered orthogonal if their inner product is zero

For vectors with complex entries, using the given definition of the dot product would lead to quite different geometric properties. For instance the dot product of a vector with itself can be an arbitrary complex number, and can be zero without the vector being the zero vector; this in turn would have severe consequences for notions like length and angle. Many geometric properties can be salvaged, at the cost of giving up the symmetric and bilinear properties of the scalar product, by alternatively defining

This type of scalar product is nevertheless quite useful, and leads to the notions of Hermitian form and of general inner product spaces.

The Frobenius inner product generalizes the dot product to matrices. It is defined as the sum of the products of the corresponding components of two matrices having the same size.

are two tensors with element representation

the elements of the dot product

All content from Kiddle encyclopedia articles (including the article images and facts) can be freely used under Attribution-ShareAlike license, unless stated otherwise. Cite this article:
Dot product Facts for Kids. Kiddle Encyclopedia.