The San Bernardino City Council is considering another redevelopment effort. The city’s Economic Development Agency presented the council with a draft of the Downtown Core Vision / Action Plan in 2009. – a guide for revitalizing downtown San Bernardino for the next 10 years. The plan is the culmination of a year of research, community participation, and planning led by the city’s EDA and the urban planning firm EDAW. The city is discussing the construction of a new government center/civic plaza that will contain an iconic 24 story tower. On May 11, 2014 the county of San Bernardino opened a 12 story, 200-foot-tall courthouse known as the San Bernardino Justice Center. The county will consolidate many county-wide court functions in the new structure, which is the tallest building in San Bernardino and the Inland Empire.

In an attempt to revitalize the downtown area, a few youth organizations, such as the San Bernardino Generation Now, The Revolve Touch, and Sinderblocks, emerged. The groups plan to restore a sense of "Pride of ownership" to the city beginning with the Downtown Summer Fest in San Bernardino, creating attention for the beauty of the downtown district. This group uses catchy hashtags to grab the attention of many, such as #WeLoveSB14 and #WeLoveSanBernardino. The San Bernardino Generation Now movement is catching the attention of many as the city begins to rebuild and new businesses begin to look at the downtown area as an open canvas of opportunity.

Seccombe Lake Park includes a lake named after a former Mayor of San Bernardino. It is located at the corner of 5th Street and Sierra Way. On December 10, 2015, federal authorities searched the lake after receiving a tip that the shooters in the San Bernardino terrorist attack visited on the day of the attack. A dive team searched for evidence but nothing relevant was found.

Meadowbrook Park is the main downtown park and is home to much activity. The park is located at the corner of 3rd Street and Sierra Way

Court Street Square is a square in the downtown area used for the Main Street's events. Downtown San Bernardino is home to many festivals throughout the year including the annual Route 66 Rendezvous, in honor of mother road U.S. Route 66. Approximately 500,000 classic cars come from around the world for this event which takes place on the third weekend in September for four days and three nights of a classic car parade. Court Street Square is at the corner of Court Street and "E" Street. 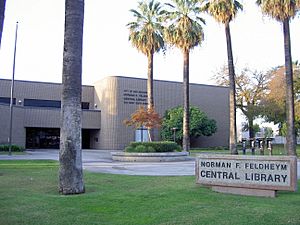 The Norman F. Feldheym Central Library is the flagship of the San Bernardino Public Library system. It opened on September 30, 1985, and is the city's fifth central library building since the first one was operated out of a rented house in 1891. Architects Gregory Villanueva and Oscar Arnoni designed the 64,000-square-foot (5,900 m2) $6 million facility, which was named in honor of the late Rabbi Norman F. Feldheym. The library provides a number of cultural enrichment programs for youth and adults in the local community. Partnering with the San Bernardino City Unified School District, the library supports a community Reading Festival for third-graders and their families. The library also sponsors an annual book fair at Cal State San Bernardino, reading clubs, and an "Academy of Public Scholars" critical review club devoted to works of Continental philosophy. 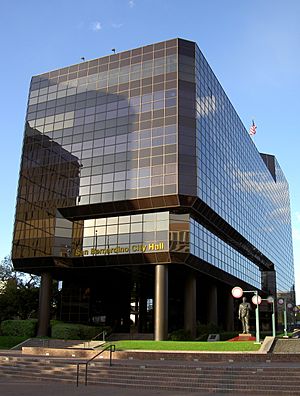 City Hall is a six-story building designed in 1963 by César Pelli to reflect the urban environment around it. Completed in 1972, the City Hall is modernist in style, has curtain walls, and is clad entirely in glass, with slim aluminum mullions. Parts of the building are raised off the ground by pilotis.

Carousel Mall originally opened as Central City Mall in October 1972. In the late 1980s, the mall began to decline due to reduced interest from businesses in close proximity to Inland Center (which is closer to the 215/10 Interchange) and rising crime in the area. Its name was changed to the Carousel Mall as part of a failed revitalization plan in the early 1990s. All the anchor stores and many of the businesses left.

In response to the closures, the mall's owners developed a mixed-use concept to fill vacated retail outlets with offices. LNR Property Corp purchased the property in February 2006 with the intention of developing a high density residential and commercial project. In January 2008, after facing deadlock with the city, LNR Corp sold the Carousel Mall to M & D Properties for $23.5 million.

American Sports University is a private, non-profit sports business university in the downtown area which has remained unaccredited since its inception in 2006; it is seeking accreditation. It has been granted approval to operate from the Bureau for Private Postsecondary and Vocational Education of the State of California. 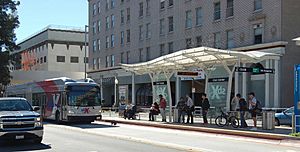 The Downtown Transit Center is the largest and first inter-model transit center east of Los Angeles, located on a five-acre site located on the southwest corner of Rialto Avenue and E Street near the San Manuel Stadium. The Transit Center will connect the Mountain Areas and the High Desert with the rest of Southern California, via Omnitrans, the Mountain Area Regional Transit Authority and the Victor Valley Transit Authority. It serves as a transfer point for bus routes the county, with future connections to the sbX Bus Rapid Transit system, which will connect Verdemont/California State University, San Bernardino to the Veterans Hospital in Loma Linda and the Downtown San Bernardino Passenger Rail System; which is a one-mile Metrolink extension from the Santa Fe Depot, and the Redlands Passenger Light-Rail Project with stops on route to the University of Redlands. Construction began in June 2013 with minimal service opening in April 2014 (sbX only) while a fully operational center opening in September 2014.

The city's transportation agency, Omnitrans, is building San Bernardino Express (sbX), which is a brt line from Verdemont/California State University, San Bernardino to Loma Linda University with two stations in the downtown area; one at the Civic Centre at Court Street Square near the Entertainment District and the other at the downtown intermodel transit center on Rialto Avenue near San Manuel Stadium. 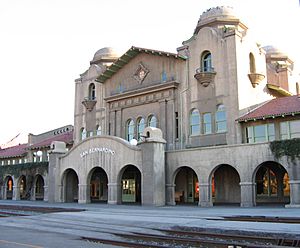 San Bernardino is the terminal station for Metrolink's Inland Empire-Orange County Line (to Oceanside via Orange County) and Metrolink San Bernardino Line (to downtown Los Angeles). Amtrak's Southwest Chief, operating from Los Angeles to Chicago has one daily train in each direction, which stops at the same station.

The City of San Bernardino is a member of the joint-powers authority Omnitrans, and downtown is a major transfer point in the local bus system. Buses primarily serve the 4th Street Transit Mall, and provide local service throughout the region, as well as express service to Riverside. A Bus Rapid Transit project, called sbX, is planned from Cal State San Bernardino to Loma Linda. A bus transit center is under construction in the vicinity of E Street and Rialto Avenue. There is also the MARTA bus which takes people directly from downtown to the communities in the San Bernardino Mountains.

The San Bernardino International Airport is expected to provide both domestic and international air services. It will provide growth to the city and the Inland Empire. Buses are expected to serve the airport, which lies two to three miles (5 km) from downtown. The airline finished major construction, however there are no current commercial flight airlines occupying the terminals. 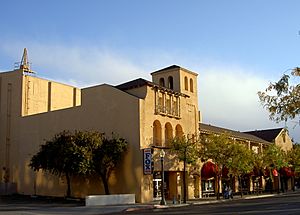 All content from Kiddle encyclopedia articles (including the article images and facts) can be freely used under Attribution-ShareAlike license, unless stated otherwise. Cite this article:
Downtown San Bernardino Facts for Kids. Kiddle Encyclopedia.