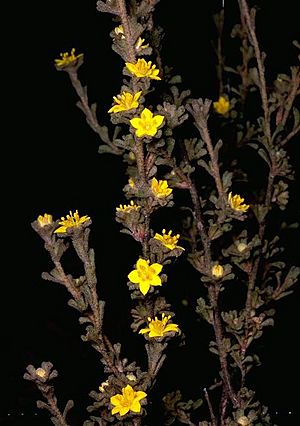 Asterolasia phebalioides, commonly known as downy starbush, is a species of shrub in the family Rutaceae and is endemic to south-eastern continental Australia. It has densely crowded heart-shaped to wedge-shaped leaves densely covered with star-shaped hairs, and single yellow flowers borne on the ends of branchlets with star-shaped hairs on the back of the petals.

Asterolasia phebalioides was first formally described in 1854 by Ferdinand von Mueller and the description was published in Transactions of the Philosophical Society of Victoria.

Downy starbush grows in woodland, forest and heath and occurs in the Grampians and Little Desert regions of Victoria and on Kangaroo Island in South Australia.

Asterolasia phebalioides is listed as "vulnerable" under the Australian Government Environment Protection and Biodiversity Conservation Act 1999 and a recovery plan has been prepared. The main threats to the species include vegetation clearance, weed invasion and disease caused by the fungus Phytophthora cinnamomi.

All content from Kiddle encyclopedia articles (including the article images and facts) can be freely used under Attribution-ShareAlike license, unless stated otherwise. Cite this article:
Downy starbush Facts for Kids. Kiddle Encyclopedia.