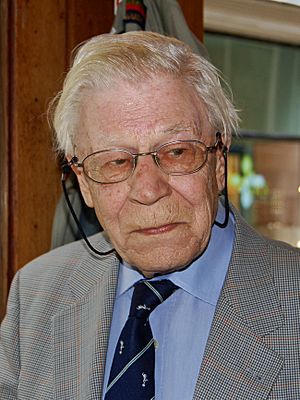 Heinz Hermann Polzer ( 24 August 1919 – 13 June 2015), better known under his pseudonym Drs. P, was a Swiss singer-songwriter, poet, and prose writer in the Dutch language. Other pseudonyms were Geo Staad, Coos Neetebeem (a variant of the name of Dutch writer Cees Nooteboom) and drandus P.

Drs. P. died at the age of 95 in Amsterdam in the Netherlands.

All content from Kiddle encyclopedia articles (including the article images and facts) can be freely used under Attribution-ShareAlike license, unless stated otherwise. Cite this article:
Drs. P Facts for Kids. Kiddle Encyclopedia.