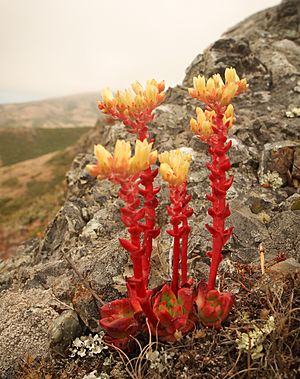 This plant is native to the coastline of parts of Oregon and northern California, where it is commonly found on bluffs and coastal hillsides. One specialized habitat in which D. farinosa is found is the Monterey Cypress forests at Point Lobos and Del Monte Forest in Monterey County, California.

This Dudleya is variable in appearance from drab to spectacular. It grows from a branching caudex and forms a basal rosette of wide, pointed, spade-shaped leaves, each up to about six centimeters across. The leaves are generally very pale green but they often have edges or tips of bright colors, particularly bright reds. The plant erects a tall stem which is pale green with pink or red tinting, atop which it bears a branching inflorescence with many pale to bright yellow flowers.

Native plants are being dug up illegally in huge numbers, originally thought to satisfy demand as house plants in South Korea and China. Recent investigations show the demand may come from a smaller community of highly skilled succulent collectors and enthusiasts.

All content from Kiddle encyclopedia articles (including the article images and facts) can be freely used under Attribution-ShareAlike license, unless stated otherwise. Cite this article:
Dudleya farinosa Facts for Kids. Kiddle Encyclopedia.