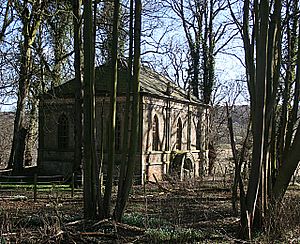 Duff House is a Georgian estate house in Banff, Aberdeenshire, Scotland. Now in the care of Historic Environment Scotland, it is part of the National Galleries of Scotland and is a Category A listed building.

The house is built of ashlar in three storeys to a square plan (9-bay x 8-bay) on a raised basement with advanced corner towers.

Duff House was designed by William Adam and built between 1735 and 1740 for William Duff of Braco. It was originally intended to have flanking pavilions linked by colonnaded quadrants but these were never completed. David Bryce Junior was later commissioned to provide a 3-storey pavilion and corridor block, but this was damaged by a bomb in 1941 and subsequently demolished.

The Earls of Fife moved out of Duff House in 1903, gifting the property to Banff Burgh in 1906. Since then Duff House has been in turn a palm court hotel, a sanatorium, a prisoner of war camp and a barracks but still sits in a designed landscape, albeit with addition of a golf course. Since 1995 it has been part of the National Galleries of Scotland.

All content from Kiddle encyclopedia articles (including the article images and facts) can be freely used under Attribution-ShareAlike license, unless stated otherwise. Cite this article:
Duff House Facts for Kids. Kiddle Encyclopedia.