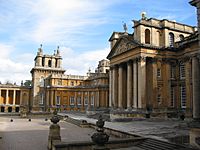 The entrance of Blenheim Palace.

Duke of Marlborough is a title in the Peerage of England. It was created by Queen Anne in 1702 for John Churchill, 1st Duke of Marlborough. The name of the dukedom refers to Marlborough in Wiltshire. It is the only current dukedom in the Peerages of England, Great Britain or the United Kingdom that can pass to a woman and through a woman. The family have long been involved with the politics of the day. They are also famous for their traditional home which is Blenheim Palace. This is the only non-royal palace in the United Kingdom. The family still live at the palace. The duke is entitled to the style of address of Your Grace.

The heir apparent to the Dukedom is George Spencer-Churchill, Marquess of Blandford (b. 1992). He is the eldest son of the 12th Duke.

All content from Kiddle encyclopedia articles (including the article images and facts) can be freely used under Attribution-ShareAlike license, unless stated otherwise. Cite this article:
Duke of Marlborough (title) Facts for Kids. Kiddle Encyclopedia.