Dunedin Railways (formerly the Taieri Gorge Railway) is an operator of a railway line and tourist trains based at Dunedin Railway Station in the South Island of New Zealand. The railway is a council-controlled trading organisation (formerly known as a local authority trading enterprise) owned jointly by the Dunedin City Council and the Otago Excursion Train Trust.

The Otago Excursion Train Trust was formed in 1978 to operate excursions on the Otago Central Railway line, running its first train in October 1979. The services grew in popularity and the Trust realised by the 1980s that it had great tourist potential. New carriages were acquired with the "Taieri Gorge Limited" launching in February 1987.

On 19 December 1989 the New Zealand Railways Corporation announced the closure of the Otago Central railway line beyond Taieri owing to a lack of freight traffic following the completion of the Clyde Dam. Dunedin City Council then stepped in, purchasing the line as far as Middlemarch and five locomotives, which were then leased by the Trust to run its trains. The Trust continued to operate the Taieri Gorge Limited, now with its own locomotives (DJ class locomotives withdrawn by NZR in the same year), but needed a further $1m to fund its operations. A community appeal in 1990 raised $1.2m. The line beyond Middlemarch was lifted during 1991, and the trackbed handed over to the Department of Conservation in 1993. It is now the Otago Central Rail Trail, a major cycling tourist attraction in the area.

On 8 March 1995 the Dunedin City Council (through its holding company Dunedin City Holdings Limited) and the Trust incorporated a new company, Taieri Gorge Railway Limited. Dunedin City Holdings has a majority of shares (72.03%) and the Trust holds the balance of the shares (27.97%). The company operates as a Council-controlled organisation (formerly known as a Local-authority trading enterprise) under Part 5 of the Local Government Act 2002. This was due to the need to raise more capital to finance the expansion of the Trusts operation. Dunedin City Council then sold the railway line to the new company, and the Trust sold its locomotives, carriages and other assets to the new company. The company is governed according to its constitution by a board of directors comprising six people. Two of these people are selected by Dunedin City Holdings Limited, two by the Otago Excursion Train Trust and two jointly by both shareholding parties. On 1 December 2017, the company legally changed its name to Dunedin Railways Limited.

The Taieri Gorge Limited is New Zealand's longest tourist railway and stretches along the former Otago Central Railway from the 4 km peg on the Taieri Branch, 18 km west of Dunedin, to Middlemarch, a distance of some 60 kilometres. Between Dunedin and the start of the line its trains operate on KiwiRail's Main South Line via a running rights agreement.

The line travels through spectacular scenery along the banks of the Taieri River, through numerous tunnels and climbing along the Taieri Gorge to the Strath Taieri. It crosses a dozen viaducts, including the southern hemisphere's largest wrought iron structure, and passes through ten tunnels.

At Wingatui railway station, the original building and signal box from 1914 has been restored and is one of the best remaining island platform stations in New Zealand. After the line passes through the 437 metres (1,434 ft) long Salisbury Tunnel, the longest on the line, it crosses Mullocky Gully over the 197 metres (646 ft) long Wingatui Viaduct, the largest wrought iron structure in New Zealand since it was built in 1887. The 47m tall viaduct's riveted lattice structure rests on seven concrete and masonry piers.

Shortly after the Wingatui Viaduct, the route emerges from Mullocky Gully to join Taieri Gorge, and from then on follows that gorge above Taieri River to just east of Pukerangi. On the way the line passes former stations Parera, Mount Allen, Little Mount Allen, and Christmas Creek, crossing two curved viaducts at the latter two locations. Hindon, still operating as a crossing station, is typically one of the stopping points on the trip. Just before the station, the railway tracks share a combined road-rail bridge with Hindon Road, a local backroad.

Another popular stopping point for photo opportunities is the Deep Stream viaduct. Here the line slowly starts to climb higher and out of the gorge, passing over the Flat Stream viaduct, and "The Notches", a section of short bridges and cuttings through several rocky outcrops, on its way to Pukerangi. Between Pukerangi and Middlemarch, the railway only once more comes close to the Taieri River, where it crosses Sutton Creek over another combined road-rail bridge.

The train operates daily to Pukerangi and on summer Fridays and Sundays to Middlemarch. 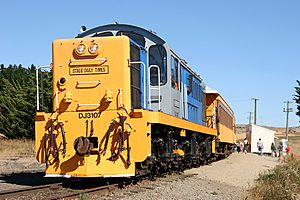 DJ class locomotive in service with Dunedin Railways at Pukerangi. 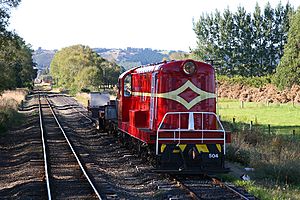 DE class locomotive on the railway.

Dunedin Railways also operates the Seasider tourist train along the coast to Palmerston, north of Dunedin, with bus connections to the Taieri Gorge Limited at Middlemarch. Following the withdrawal of the Southerner by Tranz Scenic in 2002, it is the only passenger train on the Main South Line.

In 2012 Dunedin Railways leased one of the Silver Fern class railcars from KiwiRail for use on the same route as the Seasider.

On 23 October 2014 the Taieri Gorge Railway announced that it would be changing its name to Dunedin Railways. For 35 years the Taieri Gorge Railway and the Otago Excursion Train Trust had taken tourists on scenic rail excursions up the Taieri Gorge to Middlemarch and more recently up the coast, north of Dunedin on the Seasider. The reason for the change was so that tourists can link the train trips to Dunedin and it makes it much clearer what the railway is. AO 77 was the first carriage to be repainted into their new blue livery with their name on the sides in October 2014. This was followed by A 3022 and AG 239. In September 2015 AL 1695 was repainted into their yellow version of livery.

On 20 April 2020 the company announced that due to the COVID-19 pandemic in New Zealand, it mothballed its track and equipment. The company said up to 80% of its revenue came from international tourists. The mothballing could affect up to 51 jobs.

The railway owns eight former New Zealand Railways DJ class locomotives, six of which are currently operational and certified for mainline operation. They are painted in a variant of the modified New Zealand Railways scheme carried by the class in the 1980s, where the low nose sides are painted blue instead of yellow and grey cab front. A seventh, DJ3021 (ex-DJ 1202), was stored in the Middlemarch goods shed pending future restoration after it was purchased from its former home at Ranfurly station where it was statically displayed. It is now stored in Dunedin awaiting restoration. The eighth, DJ3044 (DJ 1204) was acquired from Mainline Steam in 2012 as a source of spare parts and has been dismantled, although most of the components remain intact. Both were painted in the modified blue scheme and were in as withdrawn condition.

TGR also operates one DE class locomotive, DE 504 (TMS DE1337). This locomotive was acquired from Otago Polytechnic (who had acquired it from New Zealand Railways Corporation) in the early 1990s and is not mainline certified, instead of being based at the TGR works depot at the 4 km peg. It previously carried a modified International Orange scheme but was repainted in 2006 to its original livery of Carnation Red with the addition of "wasp stripes" on the headstocks as it would have carried in the 1970s.

In 2013, Dunedin Railways leased Silver Fern railcar RM24 from KiwiRail and currently operates this on trips between Dunedin and Waitati. The railcar was returned to KiwiRail in 2019. 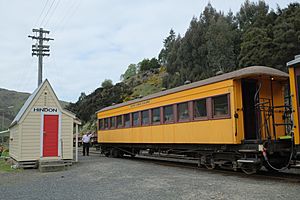 All trains as of January 2017 include some of Dunedin Railways five former New Zealand Railways 47" 6' foot wooden-clad carriages. These cars are known as "Scarrett'" heritage carriages and were built between 1912 and 1923 with open platform ends, gangways and 37 seats. Dunedin Railways has started retiring these carriages largely to provide bogies for their 56-foot carriage stock, which did not have their own bogies when they were purchased. Two of the 47-foot cars have been sold, while two were scrapped circa 1978. One carriage, A 1254, is owned by the Ocean Beach Railway (OBR) and is leased to Dunedin Railways. This carriage will be returned to the OBR at the conclusion of its lease.

Dunedin Railways has currently three steel-clad and one wood-clad NZR 50-foot carriages, formerly used on Dunedin suburban trains and express passenger trains. The steel-clads have 30-37 seats, enclosed vestibules and covered gangways and were built by New Zealand Railways Department in 1931–40. One of these is an AL class car-van with a small luggage compartment at one end while the other two are A class carriages. Steel-clad cars, A class 50159 and 50223 were sold to the Weka Pass Railway in 2008 and AL 50090 was sold to the Midland Rail Heritage Trust in 2013. The wood-clad carriages are A 1327, built in 1913, with open vestibules and non-covered gangways.

Dunedin Railways has three all-steel air-conditioned panorama carriages with open platform ends and open gangways, known locally as "Jungle Gyms" due to the nature of their framework when under construction. These were designed and built by the OETT in 1987–92, with a "very distinctive shape to fit the tunnels". Two of these carriages were built on Z class "roadsider" freight van underframes while the third was built on the underframe of guard's van F 529. 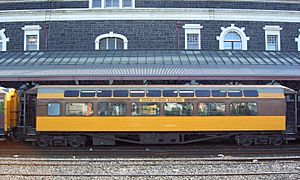 In September 2007, the Taieri Gorge Railway announced that it had purchased 12 NZR 56-foot carriages formerly used on the Wairarapa Connection. The first of these, A 2325, was prepared at a cost of $45,000 and was ready in September 2008. The company anticipated having three carriages in service by the end of 2008, and all 12 by 2013. The upgrade included new seating, carpets, toilets and external paint. The railway intends to refurbish three carriages each year. As of December 2015, only five out of the twelve carriages have been restored. Two of these carriages have since been disposed of.

In 2012, panoramic window car AO 77 was leased from KiwiRail. It has since been repainted in Dunedin Railways' blue livery, and is now under their ownership. Privately-owned A 3022 is leased from its owners since 2013. In 2018, Dunedin Railways purchased six big-window AO/ASO class carriages from KiwiRail. Two of these have since been converted to all-steel framing and reclassified as ADR. 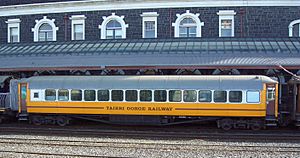 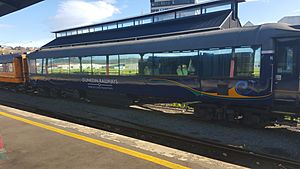 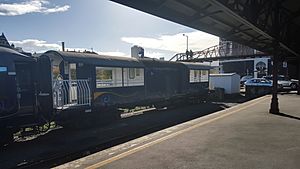 In the early 2000s the TGR investigated the possibility of introducing log haulage between Mount Allan and Port Chalmers at the end of the Port Chalmers Branch. However, on 12 June 2007 it was announced that a cost difference of NZ$5 million existed between road and rail haulage in favour of road, and potential government subsidies were insufficient to close the gap. The announcement was met with disappointment by the Dunedin City Council, which favourably viewed the rail option as it was more environmentally friendly and would have reduced traffic congestion.

It has since been worked out that with extra damage caused by the logging trucks on the Mosgiel to Port Chalmers road that it would have been cheaper to perform the operation by rail, but despite pleas by the local council, Wenita, the relevant company, said it had invested too much in the road option to change its plans.

The route's loading gauge restricts the maximum size of rolling stock that can operate on the railway; some freight wagons cannot use the line.

All content from Kiddle encyclopedia articles (including the article images and facts) can be freely used under Attribution-ShareAlike license, unless stated otherwise. Cite this article:
Dunedin Railways Facts for Kids. Kiddle Encyclopedia.