Durham Wildlife Trust, founded in 1971, is a registered charity which aims to protect wildlife and promote nature conservation in parts of County Durham and Tyne and Wear, England. It is one of 46 such organisations that together constitute The Wildlife Trusts Partnership.

Durham Wildlife Trust is a registered charity, which depends to a large extent on the support of its members, many of whom participate as volunteers in various conservation activities. The Trust's Patron is the Earl of Strathmore and Kinghorne and its President is Professor David Bellamy.

The Trust's activities cover the present unitary authorities of Durham and Darlington in County Durham and the metropolitan boroughs of Gateshead, South Tyneside and Sunderland in Tyne and Wear.

The Durham Biodiversity Partnership, which covers the same geographic area as Durham Wildlife Trust, was established in 1996 to oversee the development, implementation and monitoring of the Durham Biodiversity Action Plan (BAP), which is the medium through which the United Kingdom Biodiversity Action Plan is translated into action within the county of Durham. Members of the Partnership include a wide range of organisations and individuals who have an interest in the BAP.

Durham Wildlife Trust plays an important role in the Partnership. It provides a home for the Partnership at Rainton Meadows, and is represented on the Partnership's steering group, alongside representatives from Natural England, the Environment Agency, the Forestry Commission, Northumbrian Water, the Farming and Wildlife Advisory Group, the North East Biodiversity Forum, and the County, City and Borough Councils within the area. The Trust also operates, on behalf of the Partnership, the Durham Biodiversity Data Service, which provides high-quality species and habitat data.

Durham Wildlife Services is the Trust's commercial arm, providing an ecological consultancy service to businesses and local authorities. Although its customer base is primarily within Durham, it operates across the whole of the United Kingdom. A particular speciality is the preparation of "environmental stewardship" plans, under which farmers are able to obtain funding for properly managed conservation schemes on their land.

Profits generated by DWS are covenanted to Durham Wildlife Trust.

Education is an important aspect of the Trust's work. The main education centre is at Rainton Meadows, near Houghton-le-Spring; as well as being conveniently close to the most populous parts of the county, in Sunderland, Gateshead and South Tyneside, this centre has an indoor classroom and conference centre. At Low Barns, near Bishop Auckland, there is a second education centre, which caters primarily to outdoor activities. The Trust also arranges educational activities at Hylton Dene and Hylton Castle, mainly for the benefit of local schools in the Sunderland area.

In addition to educational facilities at its own sites, the Trust also has an educational outreach programme, under which Trust staff make visits schools or community groups.

Durham Wildlife Trust is an active partner in a number of conservation projects in County Durham:

The Trust is currently involved in projects to protect species such as the great crested newt, the water vole and the barn owl, and played an important part in helping to re-establish otters across the county's river catchments. 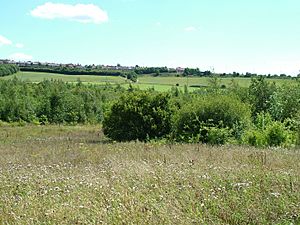 Nature Reserves managed by the Trust include Bishop Middleham Quarry, Hawthorn Dene and Low Barns, and include a range of important habitats, such as Magnesian Limestone grasslands, upland hay meadows and coastal denes. The magnesian limestone grasslands managed by the Trust represent some of the finest examples of this particular habitat type, of which only 200 ha remain in the UK.

The Trust's largest reserve is Hedleyhope Fell, near Tow Law at over 200 ha. It is one of the finest examples of recovering mid-altitude heathland in the county – a rare habitat in County Durham. The site is very important because it supports a range of rare and uncommon flora and fauna, including lesser skullcap, stag's-horn clubmoss and the velvet ant, which has not been recorded anywhere else in the County. It is also home to a large number of breeding birds and is an important site for the green hairstreak butterfly.

All content from Kiddle encyclopedia articles (including the article images and facts) can be freely used under Attribution-ShareAlike license, unless stated otherwise. Cite this article:
Durham Wildlife Trust Facts for Kids. Kiddle Encyclopedia.