The species was previously classified as the "cape" lineage of Durvillaea antarctica, but in 2012 it was recognised as a distinct species due to consistent genetic, morphological and ecological differences. In southern New Zealand, D. poha and D. antarctica can be found growing together, although D. poha normally grows higher up or further back on the rock platforms, or in more sheltered bays, where wave force is weaker. D. poha generally has wider fronds than D. antarctica, and can appear more 'orange' across the frond area.

The specific epithet is from pōhā, storage bags made by Māori out of kelp fronds.

The species has wide, air filled blades with a 'honeycomb' structure, and relative stout, pale or orange stipes. The stipes are unbranched.

The species is endemic to South Island of New Zealand, as well as the subantarctic Snares and Auckland Islands. 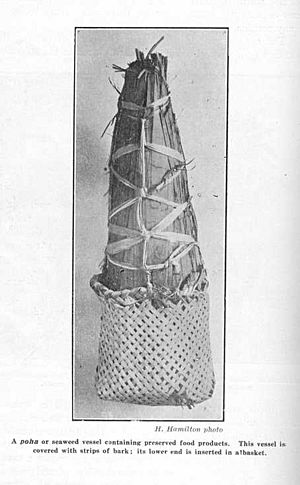 All content from Kiddle encyclopedia articles (including the article images and facts) can be freely used under Attribution-ShareAlike license, unless stated otherwise. Cite this article:
Durvillaea poha Facts for Kids. Kiddle Encyclopedia.