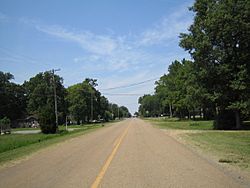 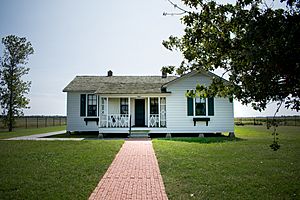 Dyess is a town in Mississippi County, Arkansas, United States. The town was founded as Dyess Colony in 1934 as part of the Roosevelt administration's agricultural relief and rehabilitation program and was the largest agrarian community established by the federal government during the Great Depression. It was the boyhood home of country singer Johnny Cash.

Dyess Colony was established in Mississippi County, Arkansas in 1934 as part of the New Deal efforts of Franklin D. Roosevelt to provide economic relief to ameliorate suffering in the Great Depression. The experiment was the largest such community-building experiment established by the federal government during these years.

The project was established by Mississippi Country cotton planter and local politician William Reynolds Dyess (1894-1936), director of the Arkansas Emergency Relief Administration, who initially sought the establishment of a self-supporting agricultural community housing 800 families upon unused Mississippi Delta farmland. Director Dyess established the entity remembered to history as "Dyess Colony" as "Colonization Project No. 1," plans for which were submitted to chief of the Federal Emergency Relief Administration (FERA) Harry Hopkins early in 1934. The project was approved by Hopkins in March 1934.

Some 15,144 acres (61.29 km2) of unimproved land were purchased by Dyess for the colonization project at the cost of $9.05 per acre, with the parcel redeemed for the payment of unpaid back taxes in this amount. The site consisted primarily of swamp and cutover forest land, although containing deep topsoil deposited by the Mississippi River, part of what was then the most productive cotton farming county in the entire United States.

The project's scope was immediately scaled back to 500 family parcels, with the participants to be recruited from Arkansas sharecroppers and tenant farmers from across the entire state. Funds for the purchase of land were provided by FERA in the form of a grant to the Arkansas Emergency Relief Administration, which initially managed the project. Subsequently, a new entity was established known as Dyess Colony Inc., the stock of which was held in trust by the US Secretary of Agriculture, and management and control passed over to the managing board of that company.

The main purpose of the town's administration was to give poor families a chance to start over with land that they could work toward owning. The original township included 500 individually owned and operated farms which were 20 or 40 acres each.

The colony was carefully planned and administered by Dyess and a board of directors, who managed the day-to-day activities of the colonists. A turnover of this top leadership took place on January 14, 1936, however, when Dyess and his top lieutenant, chief accountant and finance director Robert H. McNair, Jr., were killed in an airplane crash returning to Arkansas from Washington, DC.

After his death, leadership of the Dyess Colony passed to Little Rock attorney and Arkansas Department of Labor statistician Floyd Sharp, a personal friend of Dyess, and Lawrence Westbrook, a Texas rancher who had been recruited by Harry Hopkins to work at FERA. Westbrook was fired by Hopkins in 1937 for a highly absentee work ethic and for attempting to imperially micromanage the colony's affairs from his desk in Washington.

Two cooperative associations were incorporated by the board of directors of Dyess Colony Inc. — a consumer cooperative which operated a colony store and other businesses and a producer cooperative which coordinated the processing and sale of cotton farmed by residents of the colony. The colony also launched its own cooperative credit union not later than 1938.

The Dyess Colony gained a powerful opponent in the form of Governor Carl E. Bailey, a rival and political opponent of Floyd Sharp. It was the Governor and his allies who persuaded the directors of Dyess Colony Inc. to incorporate under Arkansas rather than Delaware law — an action which later made the colony vulnerable to punitive bureaucratic attack. Multiple attempts were made in the Arkansas legislature to undermine and disestablish the Dyess colony, an effort culminating on March 10, 1939 when the Arkansas Corporation Commission, serving at Gov. Bailey's pleasure, revoked the Dyess charter for failing to file reports for three years and failing to pay an $11 annual corporation fee.

In an effort to avoid additional capricious action, a new legal entity called the Dyess Rural Rehabilitation Corporation (DRRC) was established, to which Dyess Colony Inc. sold its assets. This succeeded in saving the non-profit colony until the DRRC was absorbed by the Farm Security Administration (FSA) in 1944. The federal aspect of the project was formally terminated in 1951.

There were 177 households, of which 49.7% had children under the age of 18 living with them, 62.1% were married couples living together, 13.0% had a female householder with no husband present, and 21.5% were non-families. 19.8% of all households were made up of individuals, and 9.6% had someone living alone who was 65 years of age or older. The average household size was 2.91 and the average family size was 3.36. 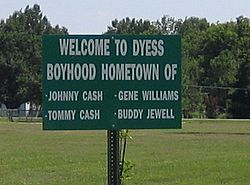 The Dyess school district merged into the South Mississippi district in 1968.

Dyess is known as the hometown of iconic country singer-songwriter Johnny Cash, who grew up in the area from the age of three. His boyhood home is listed on the National Register of Historic Places, along with various surviving buildings from the colony period.

All content from Kiddle encyclopedia articles (including the article images and facts) can be freely used under Attribution-ShareAlike license, unless stated otherwise. Cite this article:
Dyess, Arkansas Facts for Kids. Kiddle Encyclopedia.